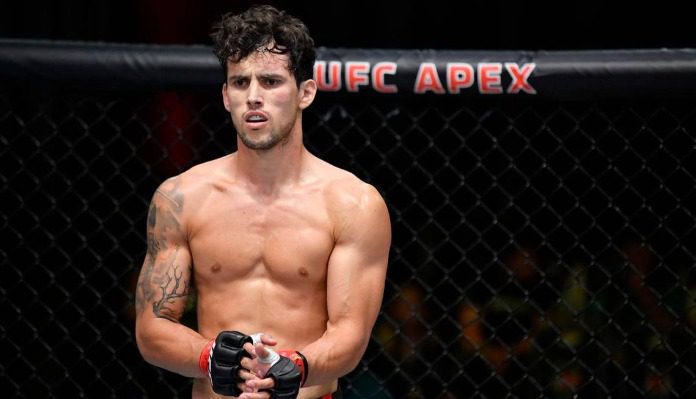 Claudio Puelles didn’t think Clay Guida would go to the ground with him.

Puelles was set to face Guida in the co-main event of UFC Vegas 52 which was the biggest fight of his career. Heading into the fight, he figured Guida would want to strike with him and Pulles was confident he would find the KO. Yet, once the veteran took it to the ground, he was confident he would submit Guida.

“To be honest, I thought I was going to knock him out, I didn’t think I was going to submit him, or maybe a submission after I hurt him on the feet,” Puelles said to BJPENN.com. “I was confident I would catch him on the feet and I end up getting the kneebar three minutes in after trying for like four different submissions before that. He did the smart thing to tap as if I held it for like two or three more seconds he would’ve torn his knee and had to have surgery.”

Since the win, Claudio Puelles has noticed a lot of fans and other fighters are starting to pay attention to him. He believes he should’ve been getting noticed a lot sooner as now he is getting too good for a lot of fighters in the division.

“I mean, I’m finally getting recognition from everybody as a threat. I’ve been here for a long time and I always knew I was a threat in this division and people should’ve paid attention and tried to fight me before it’s too late and I get too good,” Puelles said.

With Puelles picking up the win, he says he wants to return in a few months. He hopes a top-15 opponent comes next but won’t hold his breath for that.

“I just want to be paid good, I want to take whatever fight they give me. If it’s a ranked opponent or whoever, I will look for a good fight. It really comes down to whoever the UFC matchmakers and my manager think is a good fight for me,” Puelles said.

Who would you like to see Claudio Puelles fight next?