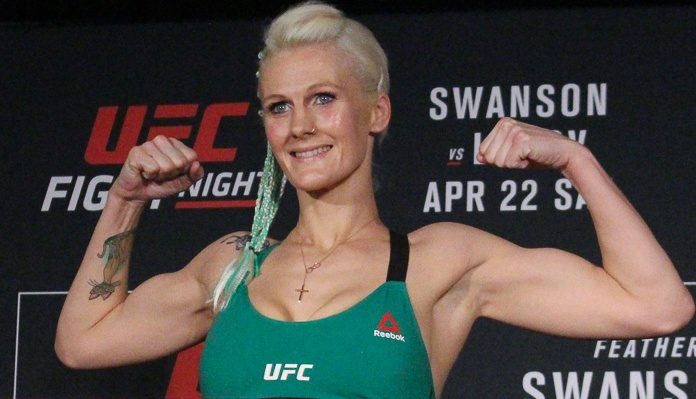 Former UFC women’s bantamweight Cindy Dandois was allegedly the victim of a vicious beating by her ex-boyfriend outside her home in Belgium.

Dandois told HLN that she had recently broken up with her ex-boyfriend, called by the initials M.B. in the news article. The initials stand for Musti Brika, who is also an MMA fighter and who was named as the attacker on the SCEPTR news website. According to Dandois, she told Brika that she wanted break up and remain friends, but he was not happy and had been threatening her for a while. She was shocked when he showed up at her front door and beat her last Friday afternoon, cutting her face and breaking her nose.

“An ex of mine couldn’t believe we were parting and I just wanted to go through life as friends,” Dandois said. “Jealousy, then. He had been threatening me for a while, but I didn’t take those threats seriously. Until he stood at my door.”

Dandois posted photos of the aftermath on her Facebook. Check them out below. Warning: graphic images.

Witnesses say that Brika used a key to attack Dandois, leaving her with several gashes on her face.

“I was not prepared for the attack at all. Before I knew it I got slapped in the face. My nose is broken and crooked,” Dandois said. “There is also a deep cut that was stitched with seven stitches. It will be a scar for life. Hopefully they will be able to straighten my nose again. I should have taken the threats seriously from the beginning, but I always hoped he would cool down. Not so.”

Dandois says that despite the vicious attack, she does not want to see her ex-boyfriend go to prison. She says she just wants him to pay her medical costs.

“I’d be very happy if he had to pay for the financial costs. I don’t need to send him to prison. We are all people, we all make mistakes. I hope he sees them, pays for what he has done, and picks up his life again. And leave me alone, of course. At least they don’t get me small. I am not a pathetic victim who cries in a corner. It’s tough, but I’m still here. Fortunately. This could have ended differently,” Dandois said.

Dandois, nicknamed “Battlecat,” is a 35-year-old Belgium native who competed once for the UFC in 2017. She also competed for Bellator in 2018, plus RIZIN and Invicta FC. Overall, she has an 18-5 record in mixed martial arts and is considered one of the top fighters out of Belgium.

Brika is a veteran of Cage Warriors who has a 1-1 amateur record. According to Tapology, he has a fight coming up in two weeks in Greece. Dandois is also scheduled to compete in the main event of that same card, and despite being the victim of this horrific attack, she still plans to fight on the card.