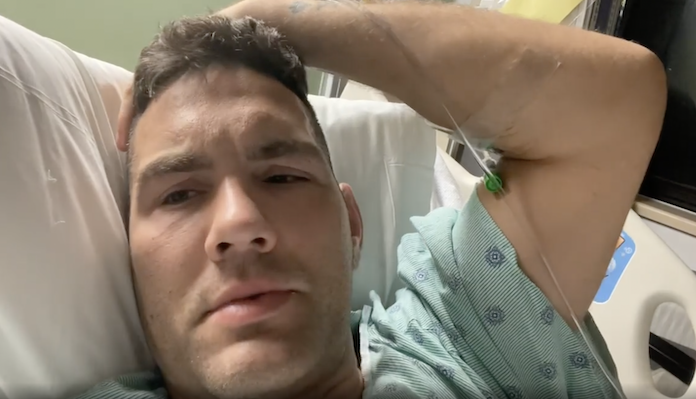 Chris Weidman will be going back under the knife.

At UFC 261 in April, Weidman was rematching Uriah Hall in an anticipated fight. Unfortnately, on the first kick he threw, he broke his leg in a gruesome fashion. Weidman was rushed to the hospital and had emergency surgery.

Since then, the former middleweight champion has been healing up and has actually been in the gym training. However, Weidman revealed his leg is not healing properly and he is set for another surgery.

🎙️"It's very easy to look at someone else who has it worse and then realize you have nothing to complain about and you can't be feeling sorry for yourself." — @chrisweidman reveals to @MieshaTate and @RyanMcKinnell that he'll unfortunately need another leg surgery 🔊

“I just found out, this is breaking news, by the way, I was planning on saying this on my podcast and my YouTube channel. But, not that, that many people care about it, I’m actually getting another surgery, I just found out,” Weidman said on Sirius XM. “I’m getting another surgery, most likely on Aug. 11. They’re going to have to plate the fibula bone because I guess it’s considered a non-union so the bones aren’t healing the way it’s supposed to, which kind of sucks. But I did expect setbacks and some issues with this type of traumatic injury.

“I’ve been through a lot. At the end of the day, I guess my mindset, I’m a positive person, to begin with,” Weidman continued. “Not that I don’t have moments of negativity and just laziness, lack of motivation but I’m usually a glass-half-full type of person. So I think that helps. If I ever feel bad for myself, it’s very easy to look at someone who has it worse and then realize you have nothing to complain about.”

The news is no doubt disappointing for Chris Weidman as it appeared he was rehabbing the leg well. It will also likely delay his return to the Octagon as the former champ was looking to return sometime in the middle of next year.

What do you make of Chris Weidman needing another surgery for his leg?