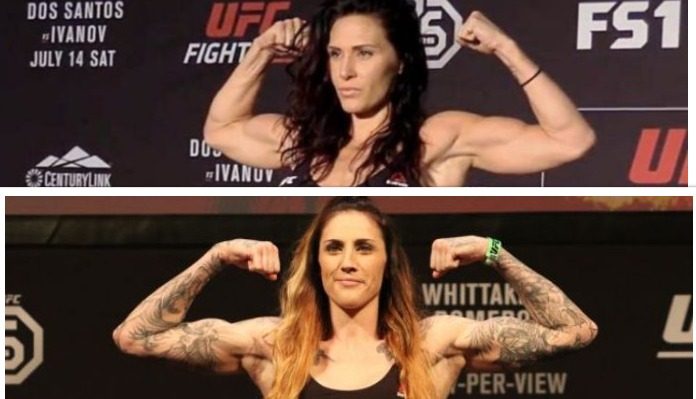 There aren’t too many fighters out there that are clamoring for title shots against Cris Cyborg that are already in the UFC. But there is one who recently spoke out.

That being none other than the former bantamweight title challenger “Alpha” Cat Zingano.

At a time, there were rumblings that the 36-year old veteran Zingano was linked to a potential fight with the longtime featherweight queen in Cyborg. But nothing would end up ever coming from it and the two continued about their businesses in their respective weight divisions.

However, for Cyborg’s next title defense, she will be taking on the current bantamweight champion Amanda Nunes whose last loss happens to have come against Zingano in 2014.

Because of this along with no upcoming fight, it prompted Zingano to throw her name into the hat as the potential fighter on standby in the case that for one reason or another one of the champions cannot compete on December 29 at UFC 232.

Another fighter with no upcoming that is looking for one is the only other featherweight in the division aside from Cyborg, the former Invicta FC champion Megan Anderson.

After seeing Zingano’s interest in a fight at 145-pounds, the Aussie let it be known that she was willing to welcome Zingano to featherweight.

If you're interested in a fight at 145lb, I'm looking for a dance partner 💁🏻‍♀️

Say the word, we ready! https://t.co/cUmBysLW2D

Pick the time and place.

I've been working on my Kansas City shuffle 💁🏻‍♀️ https://t.co/MUyYnqrzsw

Zingano: Put me in as the alternate for Cyborg/Nunez. There’s a past and a future there. Say the word, I’m ready! @ufc @criscyborg

Anderson: If you’re interested in a fight at 145lb, I’m looking for a dance partner 💁🏻‍♀️ Say the word, we ready!

Anderson: Pick the time and place. I’ve been working on my Kansas City shuffle 💁🏻‍♀️

Zingano last fought in July where she picked up her first win in four years since that big win over Nunes. She defeated Marion Reneau by unanimous decision to snap her three-fight skid. The fight also counted as her second of 2018 which makes it only the second year of her career that she’s fought more than once in (her max being three times in 2010).

As for Anderson, her last fight came in June when she made her UFC debut at UFC 225 against former bantamweight champion Holly Holm. Unfortunately for Anderson, she wouldn’t come out on top as Holm took home the unanimous decision nod. The fight was Anderson’s first since January 2017 and she now looks to hopefully get busier in the ever-shallow UFC featherweight division.