Home » MMA News » UFC » Blake Perry gets his broken nose smashed back into... 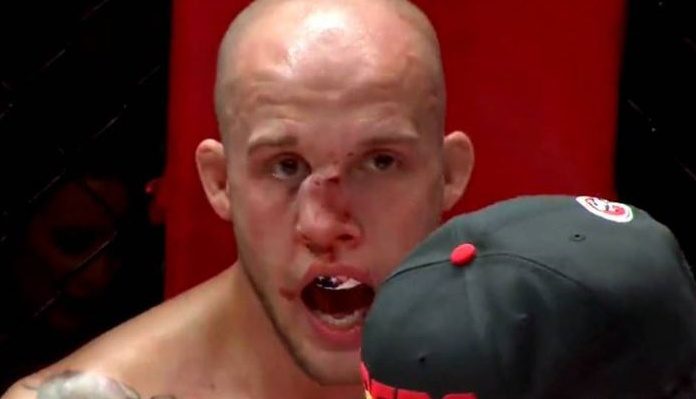 Blake Perry had his broken nose smashed back into place by an attending nurse.

This past Saturday, July 30th, at Urijah Faber‘s A1 Combat 4 in Stockton, California, Perry suffered a broken nose that forced a stoppage in the second round of his welterweight bout with Marcel McCain. The referee and ringside physician conferred and determined that the fight should be stopped.

Following the stoppage, Blake Perry allowed an attending nurse, Will Carpenter, to ‘smash’ it back into place without anaesthetic. Many are saying it is the worst broken nose they have ever witnessed.

The video, seen below per Alex Behunin, is not for the feint of heart:

Here is a video of Blake Perry getting his nose put back into place after horrifically breaking it https://t.co/IKHvbnWhAu pic.twitter.com/X1CgllsJn7

Taking to ‘Instagram‘ the Hawaiian had this to say:

“Unfortunately the doctor would not let me go out for the second round of my fight last night!”

“Even though the fight was only 1 round we still brought home the fight of the night bonus.”

“Thank you to everyone who has been checking in on me. I am healing up quick and already have a fight booked for this coming weekend.”

Blake Perry, 27, falls to 1-1 after a successful pro debut this past April. He submitted Makoa Cooper in the second round of their fight at Bellator 278.

Were you watching this past Saturday or have you reviewed the video of the incident?