Like many of us, Ben Askren was very disappointed to hear that a targeted lightweight fight between Dustin Poirier and Tony Ferguson has fallen apart.

Earlier this month it was reported that the Ultimate Fighting Championship was looking to put on a fight between the former interim lightweight title holders in Poirier and Ferguson at UFC 254.

The highly anticipated contest was expected to serve as the co-headliner to Justin Gaethje vs. Khabib Nurmagomedov on October 24 at UFC Fight Island. 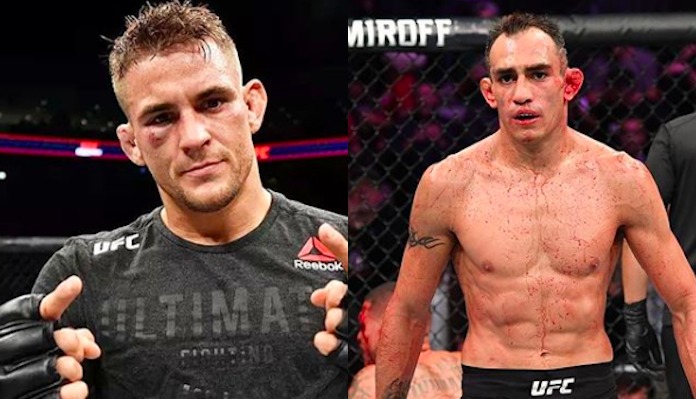 Unfortunately for fight fans, Dustin Poirier and UFC officials were unable to come to terms for the slated bout with ‘El Cucuy’ and thus ‘The Diamond’ is returning home to his family in Louisiana.

“The UFC and I didn’t come to terms,” Dustin Poirier explained. “I will not be fighting on October 24.”

Shortly following the disappointing news, former Bellator and ONE champion Ben Askren took to Twitter where he scolded Dustin Poirier for his decision.

Dustin Poirier’s seemingly unpopular decision comes one day after he revealed that the UFC would have to up their offer for a fight with Ferguson to come to fruition.

“I just need to be compensated if they want this fight. Simple as that.” Poirier explained. “I’m a prizefighter and the prize needs to be right.”

Dustin Poirier returned to the Octagon this past June where he defeated Dan Hooker in a ‘fight of the year’ performance. That victory was preceded by a submission loss to Khabib Nurmagomedov at UFC 242.

Meanwhile, Tony Ferguson suffered his first loss in eight years when he was defeated by Justin Gathje via fifth round TKO at UFC 249. Prior to the untimely setback, ‘El Cucuy’ had strung together an amazing win streak which included victories over Kevin Lee, Rafael dos Anjos, Josh Thomson, among others.

What do you think of Ben Askren slamming Dustin Poirier for not coming to terms with the UFC on a potential fight with Tony Ferguson? Share your thoughts in the comments section PENN Nation!