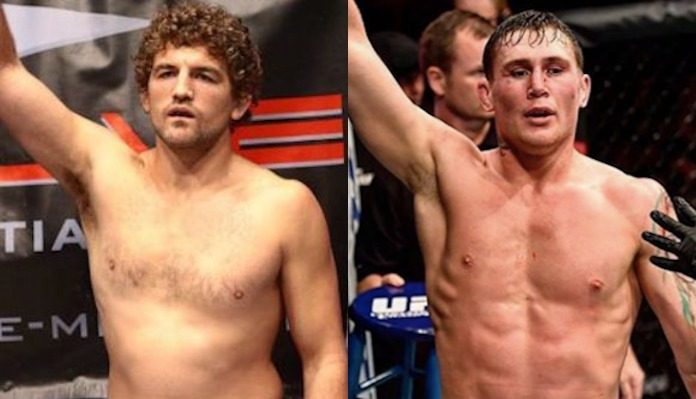 Over the last few days, former Bellator and ONE Championship welterweight king Ben Askren has taken numerous shots at recent UFC welterweight title challenger Darren Till on social media, suggesting that he’d like to fight the Brit in his anticipated UFC debut.

Speaking on a recent episode of his Rudis Wrestling podcast, Askren made it official, naming Daren Till as his choice opponent for his debut, and divulging that he’d even be willing to fight the Brit on his home turf.

“Obviously, my number one and two would be GSP [Georges St-Pierre] and Khabib [Nurmagomedov] but I know there’s no way in hell I’m getting either one of those two first round,” Ben Askren said (transcript via MMA Fighting). “So I’m hoping to get matched up with this Englishman named Darren Till. He just fought for the world title, he’s ranked number two. I had a little Twitter fight with him. I think he’s significantly overrated. So I would like to fight him.”

From the sounds of it, Ben Askren won’t have too difficult of a time convincing Darren Till to take this fight. Till has repeatedly clapped back at Askren on Twitter, and seems to be more than willing to scrap.

“[Darren Till] you have a good straight left, an average muay Thai clinch, below average BJJ, shitty wrestling and terrible cardio,” Ben Askren recently chirped on Twitter. “How is it even possible that you beat me?”

“Shitty wrestling when your boy couldn’t take me down, if that left lands though oooooooooo it’s all she wrote,” Darren Till responded. “It will take your chin clean off and hopefully that stupid haircut you hillbilly.”

Do you think Darren Till is a suitable opponent for his UFC debut?