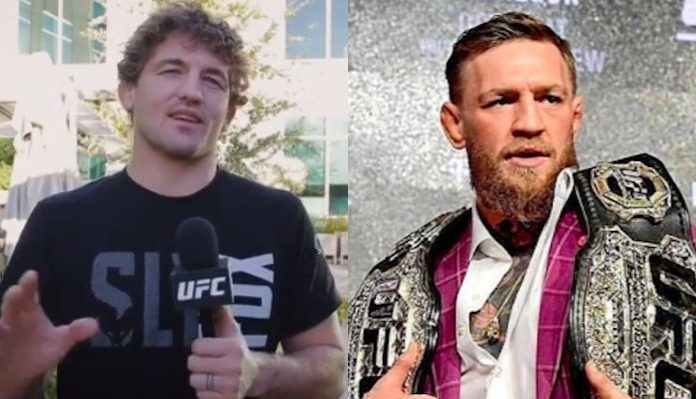 Since news of his potential move to the UFC broke, former ONE and Bellator welterweight champion Ben Askren has called out many of the UFC’s top welterweights. That said, he did not initially make a callout of former UFC lightweight and featherweight champion Conor McGregor, who is far and away the biggest star in MMA history.

On Friday morning, that changed.

Obviously I have called out @TheNotoriousMMA yet, but you know he has way too much money to take one of the whippings I’m giving out. So why bother?

“Obviously I have [not] called out [Conor McGregor] yet, but you know he has way too much money to take one of the whippings I’m giving out,” Askren said in a Tweet directed at the Irishman. “So why bother?”

Ben Askren (18-0) last fought in November of 2017, when he scored a TKO win over Shinya Aoki in a superfight that was supposed to serve as the last bout of his career. With this win, he improved to 6-0 in ONE Championship, building on a legendary run as Bellator’s welterweight champion. Over the course of his career, the American wrestler has defeated opposition such as Aoki, Luis “Sapo” Santos, Douglas Lima, Andrey Koreshkov, and Jay Hieron.

Askren has long been interested in moving to the UFC, but has simultaneously struggled to negotiate with the promotion and its president Dana White. That said, he recently claimed there is a 98% chance he’ll fight in the promotion’s Octagon soon. It seems as though he was not exaggerating.

Conor McGregor (21-4), last fought earlier this month, when he came up short in a record-breaking battle with undefeated UFC lightweight champion Khabib Nurmagomedov. This bout was his first in the mixed martial arts arena since November of 2016, when he knocked out Eddie Alvarez to claim the UFC lightweight belt. That said, he did partake in a headline dominating boxing match with undefeated boxing legend Floyd Mayweather in 2017.