Artem Lobov is looking for a fight and has extended UFC President Dana White an interesting offer in hopes of securing another octagon appearance.

“The Russian Hammer” recently took to Twitter where he offered to donate half of his fight purse to a children’s charity, this if the UFC grants him another opportunity to compete.

“Still here, still ready to go!! I’ll donate half my purse to childrens charity, in case you needed another reason @danawhite . Where are the Fertittas when you need them, they always respected and rewarded the true fighter!!” – Artem Lobov 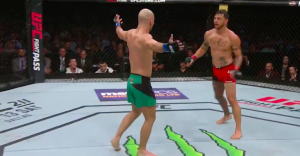 Despite his lackluster record, Artem Lobov is a fan favorite who always seems to produce entertaining fights.

With that being said, since joining the UFC ranks in December of 2015, Lobov has compiled a record of 2-5.

“The Russian Hammer’s” most recent gesture to the UFC follows his request to step in on short-notice to fight Renato Moicano at UFC 231.

Let me fight Moicano if no1 gets injured @danawhite ,I am 1 of the few to never turn down fights and 1 of even fewer to never pull out, this is the Ultimate Fighting not Ultimate stand by to fight,so lets make Moicano fight!!👊🇮🇪🇷🇺

“Let me fight Moicano if no1 gets injured @danawhite ,I am 1 of the few to never turn down fights and 1 of even fewer to never pull out, this is the Ultimate Fighting not Ultimate stand by to fight,so lets make Moicano fight!!” – Artem Lobov

Moicano was slated to face Mirsad Bektic at the December 8th event in Toronto, Ontario, Canada, but Bektic was forced out with an injury.

What do you think of the most recent offer from Artem Lobov to the UFC? Would you like to see “The Russian Hammer” back inside the octagon? Sound off in the comments section PENN Nation!