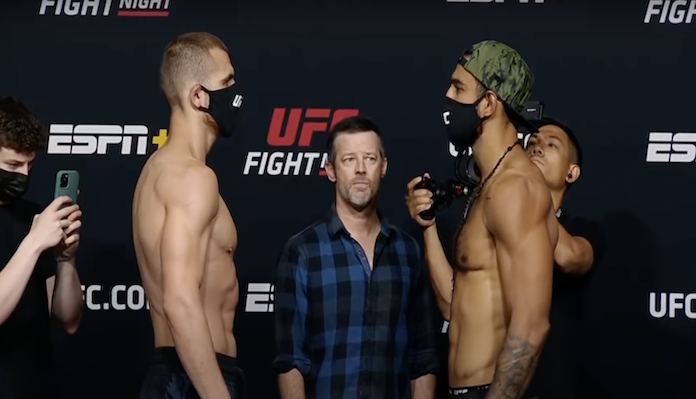 UFC middleweight Antonio Arroyo issued a statement after Tom Breese withdrew from the pair’s fight at UFC Vegas 28 at the last minute.

Arroyo and Breese were set to kick off the UFC Vegas 28 main card in an intriguing middleweight matchup, but the fight was canceled at the last minute after Breese was not able to make it to the Octagon due to medical issues. This is not the first time that Breese has had to withdraw from a fight the day of. In 2017, he was forced out of a middleweight bout against Oluwale Bamgbose. Then, in 2019, Breese was forced to pull out of a fight against Ian Heinisch after experiencing a panic attack. It’s unknown if his issues with anxiety were why the fight with Arroyo was scrapped, but it’s certainly plausible.

Regardless, it’s a tough situation for both fighters. While you have to feel bad for Breese for having a medical issue that wouldn’t allow him to compete, you have to also feel equally as bad for his opponent Arroyo, who went through an entire training camp just to have his fight yanked at the last second. According to Arroyo, who took to his social media after the fight was canceled, Breese pulled out of the fight with just 10 minutes to go.

Antonio Arroyo: The work was done, all the sacrifices were made, I did everything to be the best I could be for this fight. Unfortunately, my opponent pull out 10 minutes before of the fight. Ill leave it in gods hands.

It’s possible the UFC will try and get this fight re-booked as quickly as possible, though it’s also possible the UFC matchmakers will release Breese given this is not the first time he has had to pull out of a fight at the last minute. Either way, it’s a very unfortunate situation, and hopefully both fighters are able to get back into the cage again very soon.