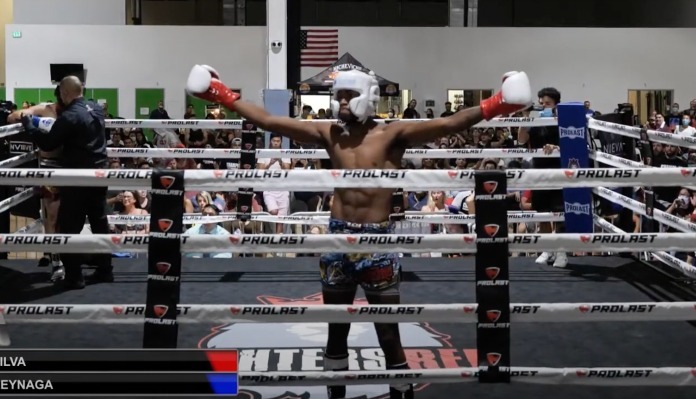 Kalyl, who is 22-years-old and used to play soccer in the United Premier Soccer League, made his kickboxing debut at FightersRep 10 over the weekend in California. He was fighting Anthony Reynaga in a 159-pound fight and Silva scored an eight-second KO win. He recorded the knockout on the first kick he threw.

Although the ref didn’t wave off the fight until 11 seconds into the round, the official result read Silva as the winner by KO just eight seconds into the fight. It was a great setup and just shows he has KO power just like his dad, who was in his corner. He also grew up in combat sports, so it shouldn’t be a surprise to see him have success in his debut. This also could very well be the beginning of a long career in combat sports for Kalyl Silva.

Anderson Silva’s other son, Gabriel was also supposed to compete on the card but his fight was pulled due to undisclosed reasons.

As for their dad, Anderson Silva is set to return to the boxing ring on September 11 in Los Angeles against another former UFC champ in Tito Ortiz. The bout will serve as the co-main event to Oscar De La Hoya vs. Vitor Belfort under the Triller Fight Club banner.

Silva also made his return to the ring earlier in June and he earned a decision victory over Julio Cesar Chavez Jr. in Mexico. Prior to that, he was released from the UFC following a TKO loss to Uriah Hall which was his third loss in a row.

What do you make of Kalyl Silva, the son of Anderson Silva’s, KO win in his kickboxing debut?