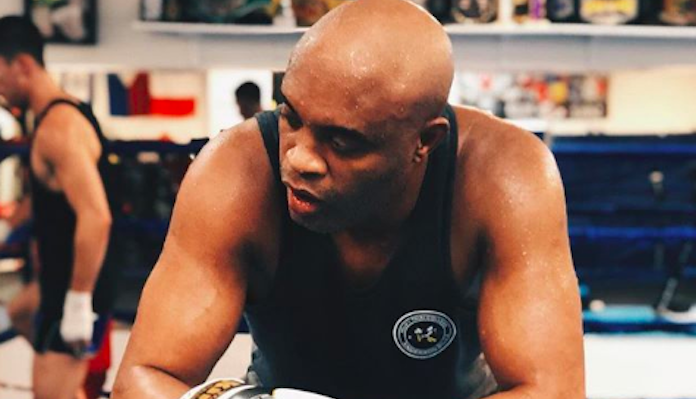 At 43 year old, former UFC middleweight champion Anderson Silva is still competing — and he’s doing so against the very best fighters in the world. In fact, the MMA legend will battle arguably the most hyped fighter in the UFC this weekend, when he takes on the undefeated Israel Adesanya in the co-main event of UFC 234..

While Anderson Silva is still content competing against the apex predators of the middleweight division, however, his family would prefer that he hang up the gloves.

“When I talk to my kids and my wife and all my family, it’s all the same — ‘Why?! Don’t do that!’” Silva said at the UFC 234 pre-fight press conference (via MMA Fighting). “And I say, OK. Let me tell you something. This is my life, this is me. And I need to do something for me.

“Because when I stop, I never come back. And at this point, my family say, ‘OK, just do it. Do it. Do it the best you can and come back safe for home.’ It’s not easy. Everybody here has a family and everybody’s families try to stay close to you, doing something for your [safety]. Because it’s a war. Inside the cage, everybody is not joking.

“Sometimes big accidents happen. I broke my leg. Sometimes you cut your face and back to home and look at your family and look at your kids. Everybody looks at you and says, ‘Why do you do that?’ It’s a passion.

“You love your job, you keep doing it. My family respects my job and respect my dreams. That’s why I continue to fight.”

While Silva still seems content to fight, UFC President Dana White believes the legend is likely to retire if he’s knocked out at UFC 234.

“I don’t know. I would probably imagine [it would be the end],” White told TMZ when asked what would happen if Silva was knocked out. “But, who knows with this guy.”

How much longer do you think Anderson Silva will continue to fight?