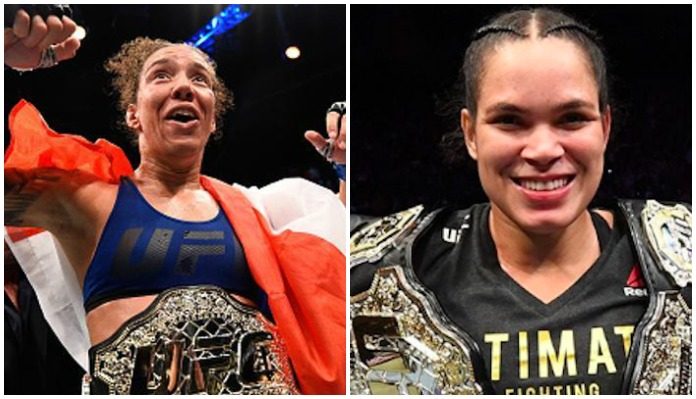 Amanda Nunes is confident that she can defeat Germaine de Randamie for a second time in their UFC 245 match-up.

The two-division champ is set to defend her bantamweight belt against the “The Iron Lady” on December 14th, at the T-Mobile Arena in Las Vegas, Nevada.

In 2013, Nunes administered her killer KO power to finish de Randamie and tally another win. “The Lioness” took her opponent down to the mat to deliver ground and pound and achieve a swift first-round finish.

During a UFC 245 press conference, the champion showed she is as confident as ever and is ready to recreate her first-round finish.

“I feel like she deserves (a title shot),” Nunes said of de Randamie (transcript via MMA news). “She’s the next one. I respect her a lot. She evolved a lot, but we fought when I was at the beginning of my career with the UFC. Now I’m a double champion, and there’s a lot of experience involved in that. I will bring this belt home with me. No doubt in my mind.”

Since their first Octagon meeting, both women have gone on to become UFC champions with Nunes maintaining a dominant position as both the bantamweight and featherweight champ. The Brazilian has won five out of six championship bouts via stoppage, and is set to make another statement:

“I know her very well. I beat her when I was at the beginning of my career at the UFC, and I was able to beat her. Imagine now, with the experience I have with these two belts at home. I’m here to make statements, make history and keep putting my name at the top of the mountain. I will prove it once again.”

De Randamie is considered the underdog for UFC 245 but has achieved a succession of strong wins. she hasn’t lost since her 2013 bout against Nunes. Despite being confident in victory, Nunes doesn’t underestimate her opponent’s striking arsenal.

“Germaine is a very good striker, [But] If you won’t play her game, she won’t have any chance against you,” she said of the former kickboxer. “I’m going to make her play my game, and the fight’s going to play out the way I want. I have all the advantages against her.”

Are you confident Amanda Nunes will defend her title, or are you rooting for the underdog, de Randamie? Sound off in the comments below.