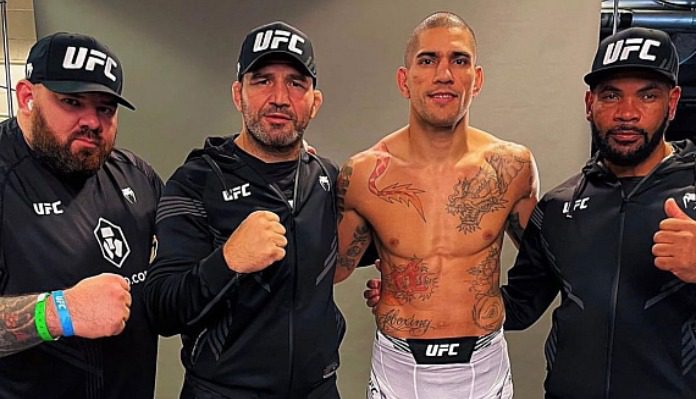 Alex Pereira is reacting to a callout from Khamzat Chimaev.

It was Alex Pereira (6-1 MMA) vs Sean Strickland (25-4 MMA) in a middleweight bout this past weekend at UFC 276.  It was Pereira, 34, who landed a devastating left hook putting Strickland down and out at 2:36 of the first round.

Heading into UFC 276 there was speculation that if both Pereira and Adesanya won it would set up a title fight between the two former kickboxing rivals. Pereira did indeed win and ‘The Last Stylebender’ (23-1 MMA) who got in the cage with Jared Cannonier (15-6 MMA) pulled out a decision victory as well.

While “Poatan” is indeed 2-0 against Israel Adesanya in kickboxing, Dana White and the UFC seem excited about matching the two middleweights up for a title fight in the Octagon.

Following the victory, Pereira was called out on ‘Twitter‘ by Khamzat Chimaev who tweeted:

Chimaev, 28, (11-0 MMA) last fought Gilbert Burns at UFC 273 in April of this year, where he defeated him via unanimous decision and consequently remains undefeated in the welterweight division.

Speaking via a translator, Pereira spoke about Chimaev’s call-out, saying to Helen Yee, of ‘HYS‘:

“Well, I’m gonna keep the same line that I always do. See what’s in front of me you know, what is ahead. Same with Sean Strickland’s fight. People were talking about Israel’s fight, and I say ‘Look, I’ve got this first.’ Right now, I’m gonna take care of my fight with Israel for the title, and then after that we’ll see about that.”

Alex Pereira is now going to focus on Israel Adesanya first and foremost.

Chimaev has several challengers at his current weight class, and is the UFC’s #3-ranked welterweight, closing in on getting a title shot of his own.

Would you like to see a Chimaev vs Pereira match-up in the near future?