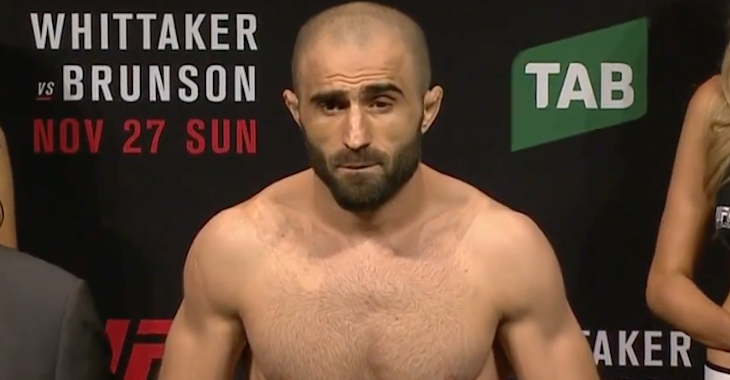 Round one begins and Omari lands a front kick and then shoots in for a takedown and gets it. This is not the start that Alhassan was hoping for but he quickly wall walks and gets back up to his feet. Both fighters miss with wild left hands. Omari lands a good kick to the body. Abdul applying pressure here. He misses with a wild left kick. Omari shoots in and scores with a beautiful double leg takedown. He looks to pass to half guard but Abdul defends. Alhassan scrambles and gets back to his feet. Abdul lands a nice kick to the body of Akhmedov. Both men score with left hands. Alhassan lands a leg kick and then another. Omari looks to return fire but misses with an attempted kick to the body. Omari lands a stiff left jab. Both men start firing off punches. This is turning in to a brawl. A big right from Abdul. Omari returns fire with one of his own. Round one comes to an end.

Round two begins and Omari throws a jab to the body of Abdul to start. Alhassan returns fire with a heavy kick to the body. Omari circles and then lands a hard low kick. Alhassan with all kinds of pressure now. He is leaping in with right hands but leaves himself exposed for a takedown and Omari gets just that. Akhmedov working from half guard. He lands a couple of shots from the top before Abdul scrambles back up to his feet. Alhassan lands a nice right hand but Omari ducks under a second strike attempt and lands a takedown. Abdul is able to work his way back up but eats some elbows for his troubles. Abdul lands a right hand that appears to stun Omari. Still, the Russian fighter continues to stand and trade. Ninety seconds remain in the round and Omari shoots in and scores yet another takedown. That was beautiful. He begins raining down some right hands from the half guard position. Omari locks in a crucifix from the top and begins working some elbows. He switches to punches. This is a bad spot for Abdul. Round two comes to an end.

Round three begins and Omari lands a nice leg kick to start. Abdul is trying find his way inside but that allows Omari to shoot in and land a double leg takedown. Abdul quickly scrambles back up to his feet and lands a right hand. He comes forward with a nice combination. Omari lands a counter right and then grabs a hold of a single leg. He scores the takedown and immediately moves to mount. Short right hands from the top by Omari. He switches to elbows. Abdul tries to buck free but Omari is not having it. One minute remains. Abdul scrambles and is able to get back up. Omari immediately shoots in for another takedown attempt. He presses Abdul against the cage. Alhassan begins working some elbows while pinned against the fence. Omari is happy to hold him there until the horn sounds to end round three.