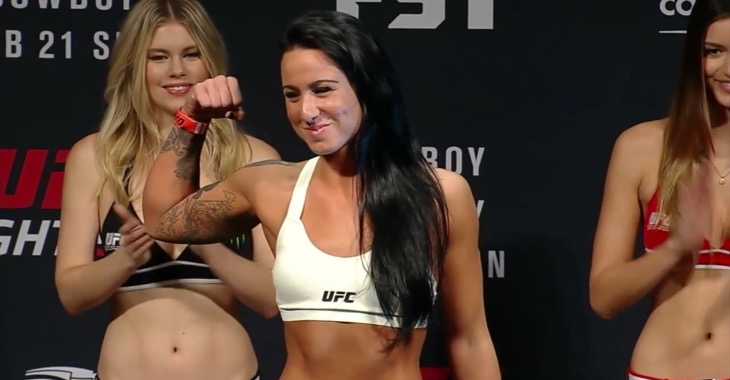 Round one begins and Reneau throws a front kick that lands to start. Evans-Smith with a good jab and then a kick to the body. Another good combo scores for Ashlee. Reneau pushes forward with punches and lands a huge right! Evans-Smith is hurt and Marion is throwing punches in bunches. Evans-Smith is able to survive the onslaught and lands a good shot when the fighters break. Reneau with a good leg kick. Ashlee throws a kick of her own and Reneau catches it and takes Evans-Smith down to the mat. Reneau locks up a tight guillotine choke but Evans-Smith is saved by the bell.

Round two begins and Ashlee opens up with a body kick. Reneau replies with two nice body kicks of her own. Nice leg kick from Reneau and Evans-Smith answers with a kick to the body. Good jabs from Reneau but Ashlee answers with a solid uppercut. Combo thrown by Evans-Smith but nothing lands. Good right hand lands for Reneau and she follows that up with back-to-back leg kicks. Ashlee fires back with a kick to the body and then another. Good jack for Reneau and Ashlee comes back with a nice combo. The horn sounds to end round two.

Round three and Reneau starts things off with a leg kick. Ashlee replies with a kick to the body. Reneau goes high then low with kicks. Marion is using some good footwork to set up her jabs. Evans-Smith gets a hold of Reneau’s leg and scores a takedown. Ashlee fails to commit to the ground position and the referee stands the fighters back up. Nice leg kick from Marion Reneau. Both fighters trade front kicks. Evans-Smith shoots in for a takedown but doesn’t get it. Good strikes from both women to end the third and final round.