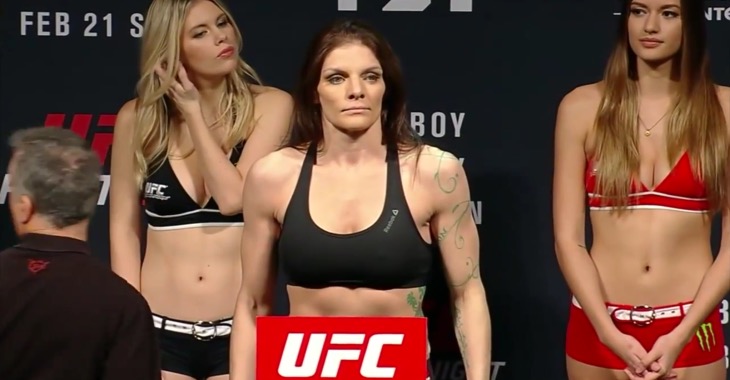 A women’s bantamweight fight between Lauren Murphy (9-2 MMA) and Kelly Faszholz (3-1 MMA) served as the second bout of the ‘UFC Fight Night 83’ card in Pittsburgh.

Round one begins and Murphy presses forward and lands a leg kick. Kelly responds with a good combo. Murphy clinches up and begins working some knees. Fasholz answers with a solid knee of her own. Good left hands from the clinch scores for Kelly. The fighters break and Kelly lands an excellent Superman punch. Murphy responds with a good right hand, but Kelly drops her with a massive right hand of her own. Lauren bounces up to her feet and Kelly lands a kick to the body followed by a right hand to the head of Murphy. Lauren responds with some good shots. Huge overhand right scores for Murphy. She’s turning the tide. Kelly is bloodied up. Murphy is landing some good knees from the clinch. Good elbow lands for Murphy before the bell sounds to end round one.

Round two begins and Kelly’s face is a mess. She lands a good overhand right to start and presses Murphy in to the fence. Lauren switches the position and decides to break. Both women are tossing leather now. Big shots from both ladies. Murphy shoots in a for a takedown but Kelly says no. Good body kick lands for Kelly. Murphy presses forward but eats a jab and then a left. Good right hands connects for Murphy. Kelly answers with a huge right hand of her own. Fasholz with a good leg kick. Murphy replies with one of her own. Kelly looks tired but is not backing down. She took this fights on two weeks notice (Fasholz). Murphy lands a good elbow inside but Kelly responds with some good shots from the inside. Big takedown by Fasholz to end round two.

Round three begins and the crowd is loving the show that these ladies are putting on. Big shots from both fighters to start. Murphy is pressing forward, she shoots in for a takedown and gets it. Fasholz is working for a guillotine but it’s not there. Shots to the body from Murphy. Kelly is trying to tie up Murphy for the ‘referee stand up’. Lauren breaks free and lands some more shots. Kelly is pouring blood now and Murphy is relentless with her ground and pound. Viscous elbows to the body from Murphy. Kelly scrambles but Murphy takes her back and then moves to mount. Huge shots now from Murphy. Kelly is a bloody mess but she’s holding on. Murphy with tons of shots from mount. The ref steps in with one second left.

Lauren Murphy defeats Kelly Faszholz via TKO at 4:55 of round three