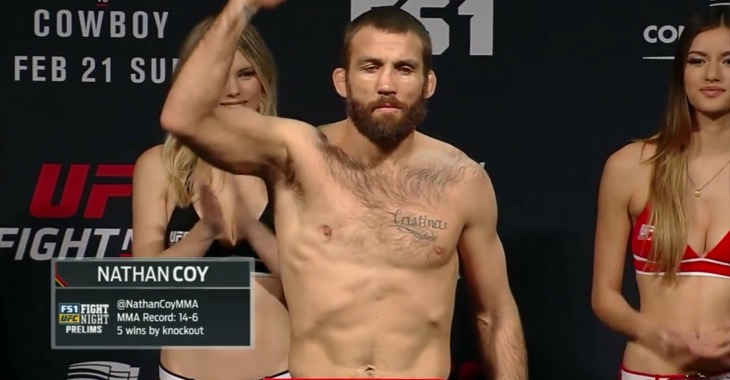 Round one begins with Coy trying to chase Webb down. Webb with big shots but they miss. Webb lands a good combo, but Coy moves away. Webb throws a high kick but it is partially blocked. Both fighters trade kicks. Good left hand lands for Coy. Webb shoots for a takedown. But Coy stuffs it pretty easily and looks to lock up a guillotine choke. Coy lets go of the choke and they break. Webb with a high kick. Coy replies with a body shot. Horn sounds to end round one.

Round two begins and Webb is able to get the fight to the floor. Coy powers his way out and grabs hold of his neck. The fighters break. Webb circles and shoots for a takedown, but Coy stuffs it. Coy is able to earn a takedown and quickly hops to full mount. He’s got an arm-triangle choke, but can’t hold it. Round two comes to an end.

Round three and Webb gets an early takedown and begins working for a submission. Coy scrambles out of it and gets back on his feet. Webb still trying for a chokehold, when Coy picks him up and slams him down along the fence. Coy with some shots from the top but Webb eventually scrambles loose and gets back up. But Coy takes him right back down! Webb looks tired. Coy with shots to the body of Webb. Webb with a kneebar attempt, but Coy escapes. Webb attempts a guillotine choke but it’s not there. Round three ends.