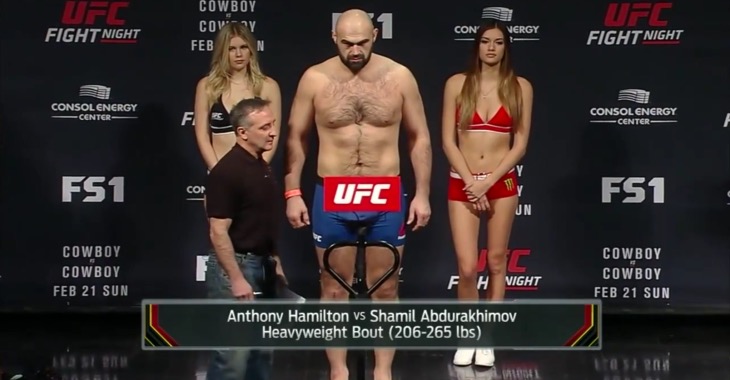 Round one begins and Abdurakhimov lands a solid uppercut. Shamil with a combo that appears to hurt Hamilton. The fighters engage in the clinch and Anthony seems to have recovered. Good counter right hand lands for Hamilton. Abdurakhimov lands a left hand and then another solid uppercut. More good shots score for Shamil. Hamilton answers with a knee to the body. Shamil with a leg kick. Hamilton replies with a right hook. The fighters clinch and Anthony starts working some knees to the body. Abdurakhimov replies with some good knees of his own before the horn sounds to end round one.

Round two begins and Abdurakhimov lands an uppercut followed by a hook. Shamil with a nice leg kick. Hamilton shoots in for a takedown but Abdurakhimov is not having any of it. Shamil with another good leg kick and he follows that up with an excellent combo upstairs. Hamilton answers with a good uppercut of his own. Another nice combo lands for Shamil. Abdurakhimov scores with two nice uppercuts. Hamilton needs to start throwing combinations. The fighters clinch and start exchanging knees. The fighters break and Hamilton lands a good jab and then a kick to the body. Abdurakhimov answers with a good leg kick. Round two comes to an end.

Round three begins and Hamilton charges forward with punches. Greg Jackson told him in between rounds that he was likely down 0-2 on the judges scorecards. Anthony is really letting his hands go now but Abdurakhimov connects with a good jab. Shamil throws a spinning back kick and then lands a stiff jab. The fighters clinch and both land solid shots before they break. Good shots land for both fighters. Abdurakhimov with another crisp jab. 90 seconds left and Hamilton starts throwing big body shots from the clinch. Abdurakhimov loses his mouth guard and the referee steps in. Long break taken to clean the mouth guard. Nearly a minute passes. The fight restarts and Abdurakhimov lands a good shot. Hamilton replies with a hard right hand of his own. The fighters clinch and Hamilton lands a knee. They break and this is it. Big kick from Hamilton before the horn sounds.