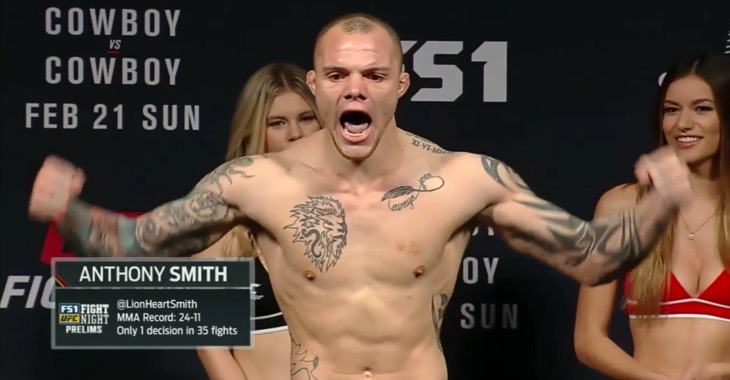 Round one begins Leleco is able to land a good right hand early. Smith shakes it off and presses forward. Straight kick from Smith followed by a knee. Anthony with a good leg kick. Leonardo presses forward but misses with his strikes. Smith with a good kick to the body. He’s walking Leleco down. Good leg kick from Smith followed by a knee and then a good shot on the break. Nice knee to the body from Anthony. Leleco is coming up short with his punches. Smith is all over him. Elbows from Anthony on the inside. Good front kick scores for Smith and then a leg kick. Leleco answers with an inside leg kick. Smith comes back with a flying knee that partially lands. Another front kick from Smith. Leleco tries to go over the top and misses. Back-to-back solid right hands land for Smith. Another right hand and then a knee from Smith. Leleco is bleeding but firing back. Round one comes to an end.

Round two begins and Smith opens with a huge combo. Leleco returns fire and lands a nice left. Leleco lands a huge right hand and rocks Smith. Anthony quickly shoots in for a takedown and gets it. Smith looks to have recovered and begins working to take the back of Leleco. They scramble and Smith winds up on top in half guard. Anthony with a big shot from the top. He’s got Leleco’s arm trapped and is raining down punches. Leonardo gets his wrist free and is able to cover up. Leleco scrambles to his feet but Smith still has a body lock and picks him up and slams him back down. The referee decides to stand them up. Leleco promptly lands a good shot and takes Smith to the floor. He tries to lock in a submission hold but the horn sounds to end round two.

Round three begins and Leleco comes forward with big shots. Smith looks cautious here. Leonardo is confident. He’s attacking the body of Smith with punches and knees. Anthony goes down and Leleco takes top position. Smith scrambles but Leleco is able to take his back.
Leleco is trying to land shots but Smith is defending well. Some good right hands begin to land for Leleco but the referee decides to stand the fighters up. Odd stand up in my opinion. Leonardo continues to walk down Smith with punches. Anthony dives in for a desperate takedown but misses. Leleco is now on Smith’s back and landing some shots. They scramble and Leonardo finishes round three on Smith’s back throwing shots.