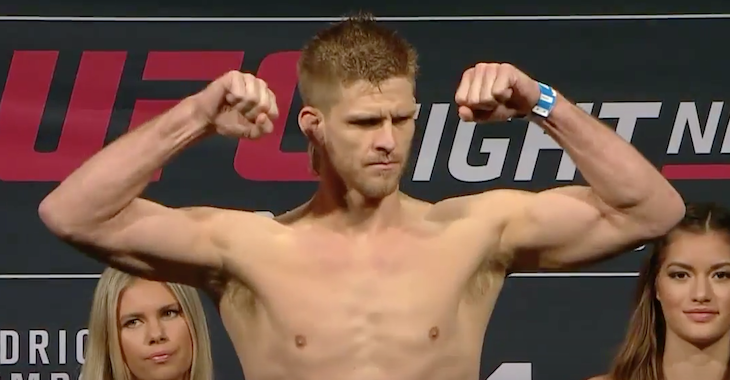 Round one begins and Sean Spencer lands a quick jab. Good kick from Burkman but Spencer lands another solid jab and then a hook. Good combo by Pyle who finishes with a knee. Excellent short left lands for Spencer. Pyle is looking to land a knee when Spencer ducks under. Good leg kick scores for Mike and then a left hand. Good right hook for Pyle. Spencer responds with a big right hand that drops Pyle. Spencer is working from full guard and then decides to return to his feet. Spencer comes forward with punches but misses. Body kick partially lands for Pyle. Both fighters trade jabs. Another left hand scores for Spencer. He follows that up with a good left hook. Round one ends with both men swinging big punches.

Round two begins and Pyle starts off by throwing front kicks to the thighs of Spencer. Good left hook lands for Mike and he follows that up with a crisp right. Spencer is pawing with his jab but it’s not landing. Good leg kick from Pyle. Big shot stuns Spencer. He is on wobbly legs. Pyle is walking him down. Spencer counters with a punch but gets caught by a spinning back fist from Pyle. Good punches from both fighters. Spencer presses forward and Pyle scores with a knee. Good counter left scores for Pyle. Sean is pressing forward but Mike is countering well. Pyle shoots in a scores a takedown. Spencer pops back up as the round comes to an end.

Round three begins and both men trade strikes. Good combination lands for Spencer. Pyle is trying to find his range. Spencer catches him with another crisp combo. Pyle dives in for a takedown and locks up a choke. Sean escapes the position but now Pyle is on top. Good knee to the body by Pyle. He tries to lock in a guillotine choke on Spencer. Sean escapes and eats some punches for his efforts. Big left lands for Spencer and Pyle replies with a right. 90 seconds left. A jab lands for Pyle. Spencer charges forward and gets caught with a big punch. Pyle rushes forward and lands some huge knees. He follows that up with punches and elbows. It’s all over!

Mike Pyle defeats Sean Spencer via TKO at 4:25 of round 3