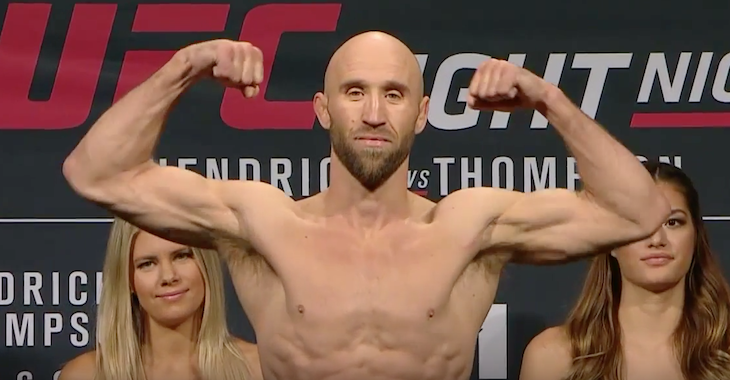 Noons opens with a jab that misses and Burkman replies with a leg kick. Another leg kick lands for Josh. Both men are trying to find their range. Burkman opens up with kicks to the body of Noons. Four in a row to be exact. Good leg kick scores for Burkman. Josh presses forward with punches but K.J. is able to avoid. Noons really needs to open up. The fans are growing restless. Good kick scores for Burkman and another. Big shots from Burkman but Noons is able to duck under and escape. Four minutes in and I don’t think Noons has landed more than one strike. Finally Noons lands a good shot while pressing forward. Big shots from both men to end round one.

Round two begins and Noons is on the offensive. He lands a good jab. Burkman answers with a leg kick. Josh rushed in for a takedown but Noons is able to defend against the fence. Burkman is relentless and ends up picking up Noons and slamming him down. K.J. bounces right back to his feet. Both men are having trouble finding their range in the striking department. Finally an overhand left lands for Noons. He comes in and connects with a right. Back to back leg kicks score for Josh. Noons misses with a hook. Good shot inside scores for Noons. Burkman is backing up now. He may be hurt. Josh with another leg kick. Good combo from Burkman and Noons lands a body shot. Another solid leg kick scores for Josh. Noons rushes in with shots to the body. He tries a head kick but it is blocked. Good spinning back kick scores for Noons to end round two.

Round three begins and Burkman shoots in for a takedown and gets it. Noons wall-walks against the cage and tries to get back to his feet. He’s up and breaks free. Noons presses forward with strikes. Both men are trading bombs. Burkman looks hurt. Noons with a big shot and Josh responds with one of his own. Knee in the clinch from Burkman. Big right hand and then a knee lands for Noons. Burkman presses Noons against the fence. K.J. breaks free and starts throwing bombs. Burkman dives in for a takedown. Noons defends well and breaks free. Good body kick scores for Josh. Noons fires back with a right but misses. Noons needs to do something big here. Josh is grinding Noons against the fence. Elbows from the top by Noons. More elbows land for Noons. Burkman has had enough and picks Noons up and slams him down. Big shots from the top by Burkman to end round three.