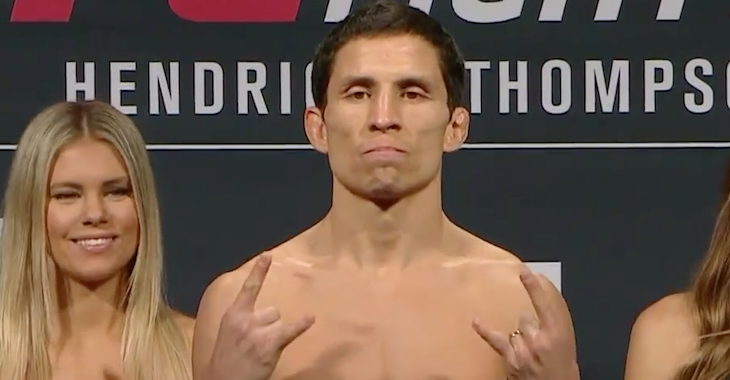 Round one begins and Benavidez opens with a right hand. Good leg kick scores for Joe. Makovsky throws a jab to the body but misses. Good combination from Joe. Makovsky lands a big inside leg kick and follows up with a takedown. Joe bounces right back up. Good shots land for both fighters. Benavidez lands a good knee. Makovsky responds with a left hand. Good elbow lands for Joe inside. Nice combo for Benavidez. He throws a head kick that just misses. Good body shot from Joe. He’s pressing forward and lands a good kick to the body of Makovsky. Excellent combo scores for Joe but Makovsky uses Joe’s forward pressure to snatch a takedown. Round one comes to a close with Makovsky on Benavidez’s back.

Round two begins and Makovsky lands a good left hand. He shoots in for a takedown but Joe stuffs it. Good combo scores for Benavidez. Nice leg kick lands for Zach. Benavidez responds with a body kick. Good jab lands flush for Joe. Zach shoots for a single leg and gets the takedown. Joe bounces up but Zach drags him back down. Benavidez pops back up and the fighters break. Benavidez is pressing forward with punches and kicks. Makovsky is having trouble getting off more than one shot. He lands a takedown on Joe but Benavidez gets back up before the horn sounds to end round two.

Round three begins and Benavidez presses forward with punches. Makovsky presses Joe against the fence but Benavidez shakes him off and breaks free. Good jabs land for both fighters. Right hand scores for Benavidez. Nice straight left scores for Zach. Joe lands a knee from the inside. The fighters clinch up against the fence and Benavidez lands a good elbow. Nice body kick from Joe and then a left hand. Nice right hands by Benavidez. Zach Makovsky tries a takedown but it’s not there. Benavidez is countering well. He lends a big elbow from the clinch. Round three comes to an end and it is pretty clear that Joe has done enough to get the judges nod.