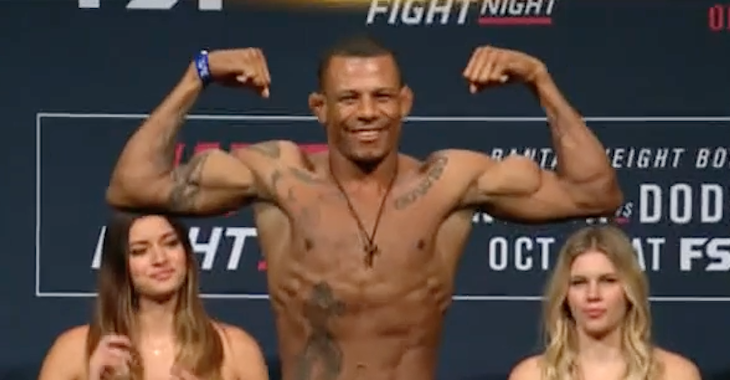 A lightweight bout between former Bellator champion Will Brooks and Alex Oliveira served as the co-main event of UFC Fight Night 96 tonight in Portland, Oregon.

Round one begins and Brooks shoots in for a takedown. Alex stuffs the attempt. Oliveira presses Brooks against the cage and begins working short shots and some knees. Brooks fires back with a knee. Alex drops down for a double leg but Will shakes off the takedown attempt. Brooks is able to switch the position and he scores a nice takedown. Oliveira is quick to get back up to his feet. The fighters exchange knees in the clinch. Alex presses Brooks against the fence. Will switches the position and scores a trip. Alex once again pops right back up to his feet. Will presses Alex against the fence and scores a takedown. Oliveira secures a guillotine choke but Brooks defends the choke until the horn sounds to end round one.

Round two begins and Alex misses with a front kick to start. Brooks shoots in and scores a nice takedown. He moves immediately to the mount position. Oliveira tries to sweep but Will is not having it. Brooks with a short elbow from the top. Alex tries to buck Will but Brooks winds up on his back. He is searching for a rear-naked choke. Alex defends or now. Will switches to some shots. Oliveira shakes Will off his back. He presses Brooks against the cage and lands a takedown. Will gets right back up but Alex is all over him. Oliveira gets Will back to the ground and begins working from full guard. 90 seconds remain. Alex with a big elbow from the top. Will scrambles and gets back up to his feet. Brooks with a nice takedown and quickly takes the back of Oliveira. He is looking to lock in a rear-naked choke. Alex shakes Brooks off. Will immediately dives in for another takedown attempt. He cannot secure the takedown and round two comes to an end.

Round three begins and Will lands a leg kick to start. He fires off another. A straight right hand sends Brooks to the canvas. Will pops right back up but Alex presses him against the cage. Oliveira lands some good knees inside and then scores a takedown. Will has an injured rib and is in a lot of pain. He fights his way back to his feet. Alex presses Will back against the fence and lands some big knees. Oliveira scores another takedown and begins working some serious ground and pound from half guard. Big shots from Oliveira and this one is over.