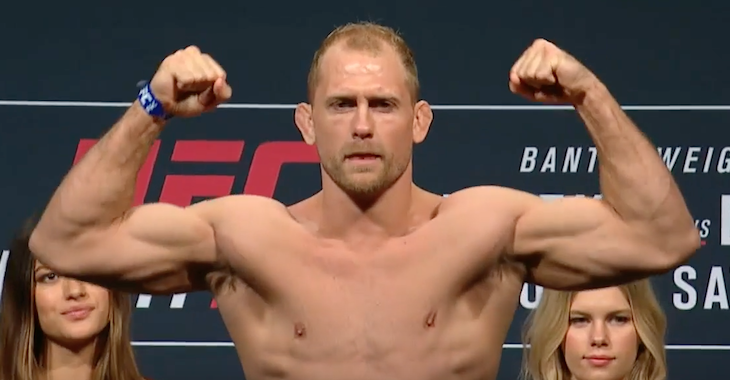 A welterweight bout between Josh Burkman and Zak Ottow took place on the main card of UFC Fight Night 96 tonight in Portland, Oregon.

Round one begins and Burkman lands a jab to the body followed by a left hand upstairs. Josh comes forward and lands a right hand and then a low kick. Ottow replies with back-to-back leg kicks. Burkman presses forward but eats a jab to the body from Ottow. Zak lands another hard leg kick. He presses forward with a combination followed by a leg kick. Burkman fires back with a low kick. He feints and lands another inside leg kick. Ottow comes forward and kicks Burkman but it lands low. The referee steps in and allows Josh to recover. We restart and Josh misses with a hook. Both men are happy to exchange in the pocket here. Ottow lands a nice kick to the body. He circles away and switches his stance. Burkman is using a wide stance here. Ottow throws a hard low kick. Burkman presses forward and lands a front kick. Zak replies with a kick and then a right hand. Burkman circles away and then comes back with a jab to the body. Zak lands another nice kick to end round one.

Round two begins and Burkman comes out swinging. Ottow lands a nice counter shot. A big leg kick lands on Burkman, but a follow up high kick counter is blocked. Ottow misses with a high kick. Burkman misses on the counter punch. Nice high kick partially lands. Ottow with some nice punches. A nice double jab lands for Ottow. Burkman eats a right trying to lunge with a knee. Burkman with a knee. Ottow fires back with a kick to the body. A stiff jab lands on Burkman. Ottow with another flurry. Thirty seconds left, and Burkman misses with strikes. Ottow takes a leg kick and barely misses on a hook to close the round.

Round three begins and Burkman immediately presses forward with punches. Ottow ducks under and shoots for a takedown but it is not there. A nice leg kick scores for Josh. Ottow lands a kick to the body. He retreats and he and Burkman exchange low kicks. Ottow lands a kick upstairs and then a right hand. The fighters trade punches in the middle of the octagon. Zak presses forward and lands a pair of pawing jabs. He backs off and then presses forward again with a combination that ends in a leg kick. Burkman misses with a wild right hand. Ottow tries to duck under a punch for a takedown but Josh presses him up against the cage. Burkman with some nice knees inside and then scores a takedown. He begins working from half guard. Ottow scrambles and get back to his feet. Burkman circles and lands a right hand. Ottow lands a kick and then shoots in and scores a takedown. He locks in a choke but cannot force Burkman to tap before the horn sounds to end the final round.