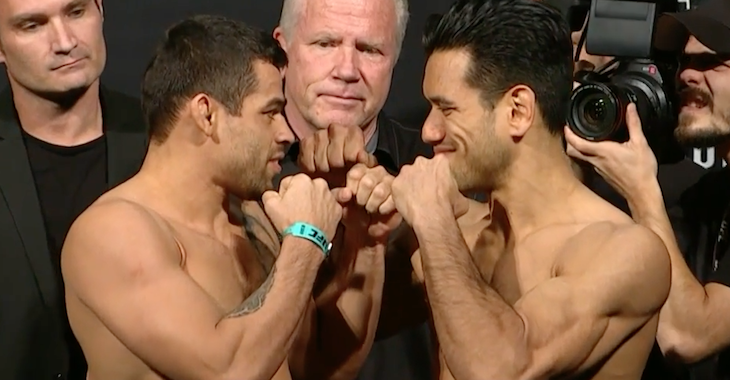 Round one begins and Nover lands a jab to start. Barao replies with his own. A low kick from Barao lands low but the fight continues. The fighters trade jabs. A hard low kick lands from Barao. Nover scores with a left, and Barao answers with one of his own. Barao fires off with two punches. Barao leaps in again, and Nover scores a counter left that sends him down. Barao pops right back to his feet. Barao with a low kick. Another left scores for Nover. Low kick for Barao. Nover with a left. Barao kicks to the body. Round one comes to an end.

Round two begins and Barao lands two early leg kicks. Nover replies with a jab. Barao goes to the body and then upstairs with punches. Renan lands two more leg kicks and then a push-kick to the body. Another nice kick to the bod scores for Barao. The former champ lands a nice counter. He comes forward with a flying knee that partially lands. Another leg kick from Barao. He is looking like a beast in round two. More leg kicks from Renan. Nover lands a body kick but eats a jab. Barao lands a jab but eats a hard low kick from Nover. Phillipe scores with a nice counter left hand. Barao comes forward and lands a nice combination. He follows that up with a kick to the body and then a takedown which scores. Round two comes to an end.

Round three begins and Barao comes forward with punches. He lands a kick. Nover replies with a counter left hand. Barao goes to the body with a jab. He lands another punch. Nover lands a kick. Barao gets a body lock and scores a takedown. Renan moves to half guard. Nover attempts to get up. He shakes free of Barao and stands up. Barao comes forward and landsa right hand. Both men trade punches. A nice knee lands from Nover. Barao presses him against the cage. Renan is searching for a takedown. They break and Nover misses with a kick. A nice jab scores for Barao. Nover misses with a left hand. Barao presses forward and lands a combination. Nover scores with a body shot and then a kick. Barao ducks under a punch and scores a takedown. Nover quickly gets his back against the cage and stands back up. Barao drags him back to the floor and the horn sounds to end round three.