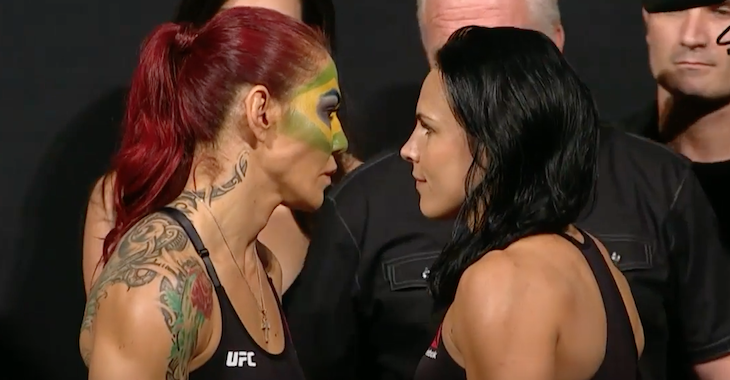 Round one begins and Cyborg presses forward with strikes early. She presses Lina against the cage and lands some knees inside. Big knees to the body from Cyborg. Lina does not seem to know how to defend the clinch position. She is holding on but eating some brutal knees to the body. Cyborg breaks and throws a big combination. Lina fires back but misses. Cris pushes Lansberg back against the cage. She lands a nice knee inside. The referee steps in a tells the fighters to break. Lina comes forward and the fighters clinch. More knees from Cyborg from the clinch. Cris drops down and lands a takedown. She moves to full mount and begins raining down some heavy punches. Lansberg fights her way back to half guard and stands up. Cyborg clinches up and lands a knee. She separates and lands a huge combo. Big shots from Cris but Lina survives to see round two.

Round two begins and Cyborg lands a huge right hand. She fires off with a big combo. Punches and kicks from Cyborg. Lina is taking the punishment like a champ. Lina presses Cris against the cage. A nice knee lands for Lansberg. Cyborg scores a takedown and winds up in side control. Big strikes from Cyborg. Cris is raining down punches from the top. She lands some big elbows. Lina is covering up and not defending much. More brutal shots from Cyborg and this one is over.