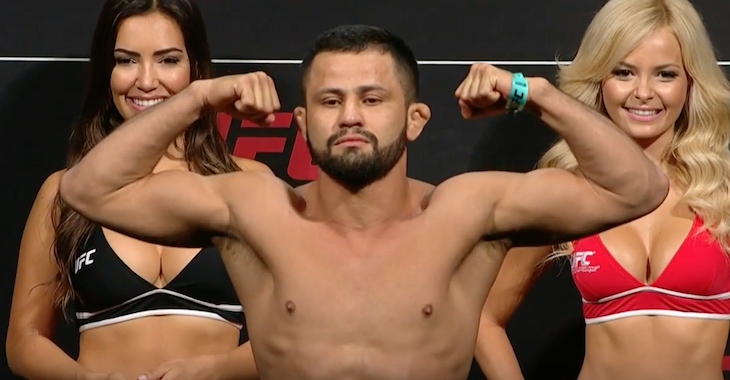 Round one begins and Ortiz lands a body shot and then a leg kick. Formiga shoots in and scores a takedown. He moves immediately to half guard. He steps over to side control. Ortiz scrambles and gets back to half guard. Formiga with some short shots from the top. Ortiz scrambles and winds up on top and in full guard. Ortiz is trying to advance his position but Formiga is doing a good job of defending. Ortiz with some short shots. Formiga gets back to his feet and round one comes to an end.

Round two begins and Formiga lands a combination to start. Ortiz comes forward with an overhand right that misses. The fighters briefly clinch then break. Formiga scores a takedown and moves to half guard. He works to advance is his position and does. Full mount. Ortiz scrambles and gives up his back. Formiga is searching for a rear-naked choke. He locks in a body triangle. Formiga with some short shots. Two minutes remain. Formiga continues to search for the choke but Dustin is defending well. Round two comes to an end.

Round three begins and both fighters land kicks early. Formiga with a right. Ortiz fires back with a combo. The fighters clinch and Formiga gets the back of Ortiz. He drags him to the floor and sinks in both hooks. Formiga is looking once again to lock up a rear-naked choke. Ortiz scrambles but can’t get Formiga off of him. Formiga looks to soften Ortiz up with some short shots. One minute remains. Ortiz scrambles and winds up on top with 15 seconds left. He drops down some good shots but round three comes to an end.