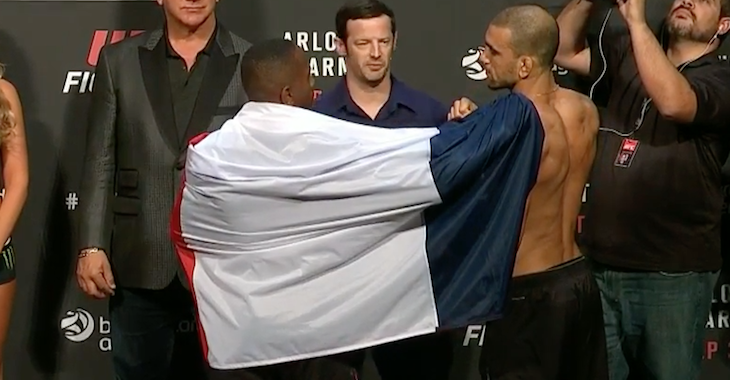 Round one begins and Issa lands a jab as Taylor presses in wildly. Lapilus comes forward with more strikes but Issa grabs a hold of his body and drags him to the floor. Taylor does a good job of working his way to cage and stands back up. Issa won’t give up on the body lock so Lapilus decides to work some short elbows while presses against the cage. Issa is relentless in working for a takedown here. He currently has a single leg locked up but Taylor is defending well. The referee sends a warning to the fighters to work. Lapilus lands some short punches. Issa keeps the French fighter presses against the cage. Taylor is finally able to break free and begins working some big strikes. He is teeing off on Issa here. Leandro circles away but Lapilus is chasing him down. Taylor is pawing with his right jab and then lands a big left hand. Issa shoots in for another takedown but round one comes to an end.

Round two begins and Issa starts things off with a leg kick. Taylor is applying a lot of forward pressure here. He lands a big left hand. Lapilus presses Issa against the cage and lands a knee inside. Leandro breaks free and misses with a high kick. Issa with a leg kick and then he shoots in for a takedown. He has Taylor presses against the cage. Lapilus is doing a good job of defending the takedown. The fighters break and Taylor lands a solid left hand. He goes to the body of Issa. Leandro with a front kick and then a follow up leg kick. Lapilus scores with a crisp jab. The Frenchman lands another nice left hand. Taylor with a body kick and then a right hand. Issa replies with a high kick that is partially blocked. Taylor with another nice jab. He presses forward and lands a combo. Issa is on the retreat now. Taylor with a right jab and then a left hook. Issa tries for a guillotine choke but Taylor shakes him off and wind up in full guard. Round two comes to an end.

Round three begins and Taylor lands a couple of right jabs to start. The Frenchman presses forward with strikes. Issa ducks under and presses Lapilus against the cage. Elbows from the top score for Taylor. Issa adjusts and takes the back of Lapilus. Taylor scrambles and is able to escape and press Issa against the cage. The fighters break. Two and a half minutes remain. The fighters engage in the clinch and Lapilus lands some good shots. Issa breaks free and circles away. Taylor chases him down with rights and lefts. Issa shoots for a desperate takedown attempt. It is not there. Taylor lands three big left hands as the horn sounds to end round three.