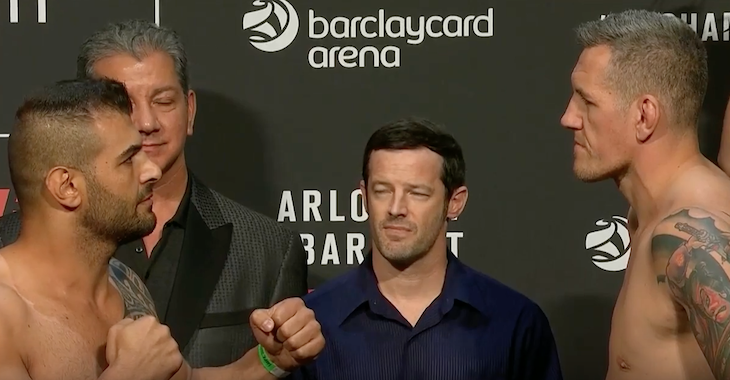 A heavyweight bout between Jarjis Danho and Christian Colombo served as the third bout of today’s UFC Fight Night 93 event in Hamburg, Germany.

Round one begins and Danho presses forward with a big overhand right that misses. He quickly grabs a hold of Colombo and tries to drag the big man to the floor. Christian uses a knee inside to shake Danho off of him. Jarjis misses with another big right but lands a shot to the body. Colombo is pawing with his jab trying to find his range. Danho lands a big right hand and presses forward. Colombo responds with a knee. Christian lands a nice right hand and another knee. Danho retreats and Colombo takes the center of the cage. Christian misses with a right hand and the fighters clinch against the cage. Colombo with some good knees inside. Danho retreats and Colombo chases after him with punches. Jarjis circles away and then presses forward with punches in bunches. Danho eats a big knee from Colombo but his hand was on the floor so the referee steps in to stop the action. The ref deducts a point from Colombo and we get back to action. Colombo misses with a front kick and Danho tosses a right hand as round one comes to an end.

Round two begins and Colombo lands a good knee to start. Danho presses forward and lands a big right hand. He shoots in for a takedown but Christian is not having it. Colombo lands a big knee as the fighters break. Christian throws a kick but trips and Danho winds up in top position. Colombo is able to get back to his feet rather quickly. Danho with a nice uppercut inside but he eats another big knee from Colombo. More knees from Christian. Danho pushes the big man against the fence and attempts a takedown. Colombo defends the shot and separates. Danho with a nice body shot followed by an excellent uppercut. Colombo with a leg kick. He lands two nice knees inside. Danho looks exhausted now. He comes forward with punches but Christian absorbs them and presses him against the cage. Colombo with some big knees. Danho drops to his knees. More shots from Colombo but Danho is saved by the horn.

Round three begins and both men look to be tired. Colombo lands a jab. Danho shoots in for a takedown but Christian stuffs the attempt. “Godzilla” is pressing the action here. Danho has his hands at his hips. He leaps forward with an uppercut. Colombo presses Danho against the cage and lands a knee. Christian is searching for a guillotine choke. He lets it go and peppers Danho with some knees. The fighters break and Christian landsa jab. Colombo presses Danho against the fence and works some knees and punches. Danho breaks free but is on the retreat. He throws an uppercut but Christian takes it and presses forward. Danho with a slap. He lands a shot but then eats some big knees. Colombo slips and Danho winds up on top. Colombo gets back to his feet and eats some big shots. The fighters clinch against the cage and Christian lands a nice knee. Some short shots inside score for “Godzilla”. Big knees from Colombo as this fight comes to an end.