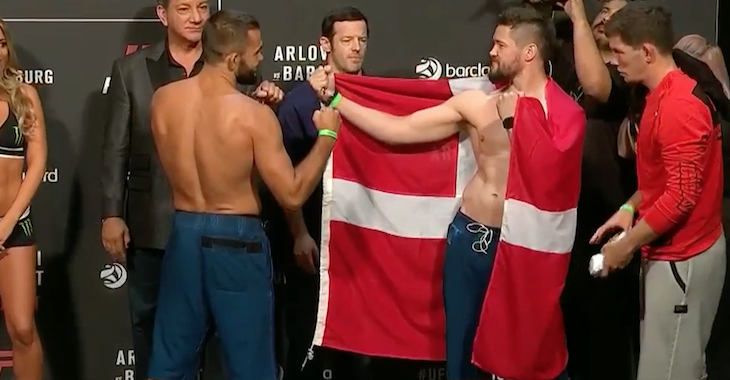 Round one begins and Dalby opens things up with a leg kick. Sobotta replies with a big shot that drops Dalby. Peter quickly pounces on him and begins working some ground and pound. Big punches and elbows from Sobotta. Dalby is bleeding. Nice short elbows and a big hammer fist score for Sobotta. Dalby scrambles but gives up his back. Sobotta quickly locks in a body triangle. He is looking for a rear-naked choke submission. He locks in the choke but Dalby is able to break fight it off. Round one comes to an end.

Round two begins and Dalby pokes Sobotta in the eye accidently. After a brief break we return to action and Peter catches a kick and drags Dalby to the floor. Sobotta is landing some good strikes. He moves to half guard and works some short shots while trying to advance his position. More short shots land for Peter. The referee is oddly telling Sobotta to work. Peter seems frustrated by the comments and begins unleashing some big shots from the top. Round two comes to an end with Peter in top position.

Round three begins and Dalby presses forward and throws and overhand right that misses. Nicolas attacks with a combination but Peter is able to avoid the shots. Dalby lands a kick to the body. Sobotta lands a crisp jab. Dalby charges forward and presses Peter against the cage. A nice elbow lands inside for Dalby. Nicolas misses with a head kick but lands a body kick. Sobotta replies with a body kick of his own. Sobotta presses Dalby against the fence but Nicolas shakes him off and breaks free. Peter with a huge body kick and then shoots in and scores with a big takedown. Sobotta is able to transition to the back of Dalby. Nicolas scrambles and gets back to his feet. Dalby is unable to land anything significant and this fight is over.