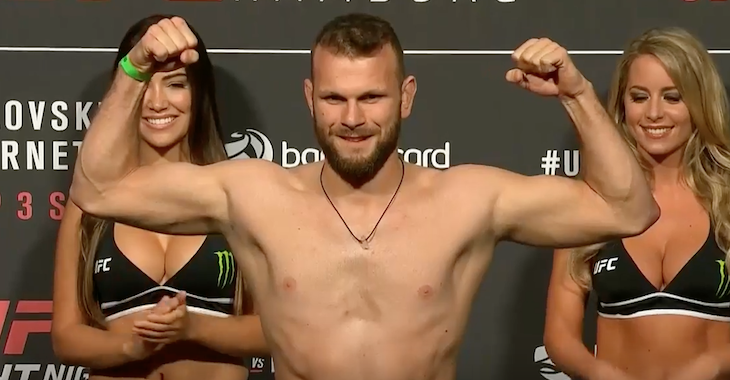 A welterweight bout between Jessin Ayari and Jim Wallhead capped off the prelims of today’s UFC Fight Night 93 event in Hamburg, Germany.

Round one begins and Wallhead misses with a leg kick to start. Jessin replies with a leg kick of his own followed by a body kick that misses. Ayari lands a big kick to the body of Jimmy. Wallhead responds with a leg kick. Both men miss with right hooks. Ayari with a front kick to the body. Jim lands a nice straight left hand. He shoots in a presses Ayari against the fence. Jessin is able to break free and quickly takes the center of the cage. Jim is applying some serious pressure now. Ayari is circling away but lands a nice counter right. A big kick and then a glancing shot that causes Ayari to slip. Jessin quickly gets back to his feet and moves away from the forward pressure of his opponent. Jim scores with a leg kick and then a nice right hand. Both fighters trade kicks. Round one comes to an end.

Round two begins and both men are happy to trade. Jimmy lands two big right hands. Ayari replies with a nice right of his own. Wallhead is applying a lot of pressure here. Ayari is on his bike but countering well. A nice left hook and then a straight right land for Wallhead. He presses forward and lands another right. Ayari fires back with a low kick. He lands another nice leg kick on Wallhead. Jim presses forward and lands a right hand. The fighters trade shots to the body. One minute remains as Wellhead presses forward. Jimmy with a nice right hand after missing with a left. Ayari swings with a left hook but misses. Jim lands a left and then a right hand. Round two comes to an end.

Round three begins and Wallhead quickly presses forward. Ayari catches him on the way in with a nice leg kick. Jimmy misses with a big left hook. He catches Ayari with a right hand. Ayari responds with a nice shot and then a kick. Wallhead presses forward and lands back-to-back leg kicks. Jim is delivering a lot of pressure but can’t seem to find his range on Ayari who is constantly moving away. Ayari finally begins pushing forward. Both men miss with punches. Ayari lands an uppercut. Jim lands a leg kick. He catches Ayari with a big left hook that stuns the German fighter and sends him to the floor. Wallhead follows up with strikes. Ayari gets back to his feet. The fighters engage in the clinch and Ayari lands some big shots. A nice left scores for Jim. Big shots from both men. Another huge shot from Wallhead rocks Ayari. Round three comes to an end.