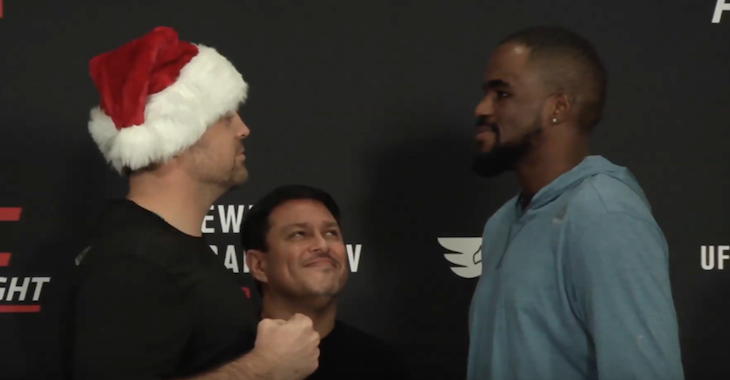 Round one begins and O’Connell starts things off with a leg kick. Anderson circles out and then comes in with a combination. Sean with a nice kick to the body. He presses forward and lands a left. Anderson grabs a hold of O’Connell and slams him to the floor. Corey moves immediately to side control and begins working some knees to the body. O’Connell gets back to half guard but eats some short shots and elbows for his troubles. Anderson with some short right hands from the half guard position. He has Sean pressed against the cage and switches to elbows. More good short right hands from Anderson. Two minutes remain. Big elbows now from Anderson. O’Connell scrambles and tries to stand back up. He utilizes the cage to wall walk but Anderson trips him back down to the canvas. O’Connell keeps battling and manages to get back to his feet. Anderson takes him right back down however and once again begins unloading some heavy ground and pound. Corey is working from half guard and landing some good short left hands. Round one comes to an end.

.@CoreyA_MMA is controlling this fight on the mat w/ the help of some lethal elbows! #UFCAlbany https://t.co/WA10n8Redx

Round two begins and Anderson lands a jab and then scores a trip takedown. He begins working some big elbows from half guard. O’Connell attempts to tie up Anderson but is unsuccessful. Anderson begins working some short right hands from the top. He is looking to move to mount. O’Connell defends the pass but is unable to scramble to a better position. Good shots from the top by Corey. He moves to mount and begins unloading some huge shots. The referee is taking a look and has no choice but to step in and stop the bout.

Anderson def. O’Connell via TKO at 2:36 of Round Two