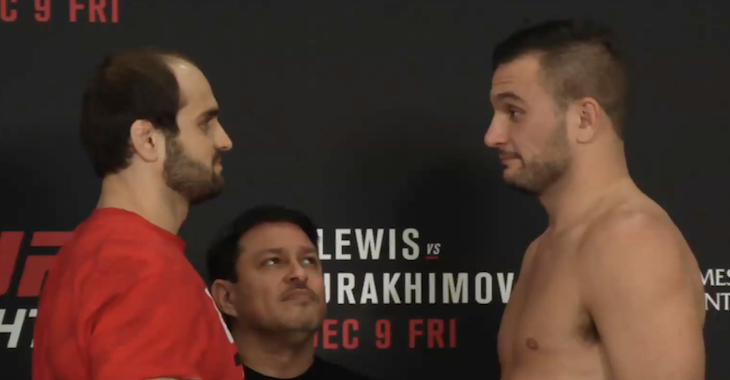 Round one begins and Safarov opens with a leg kick and then a stiff jab. Villante answers back with a hard leg kick of his own. Gian lands a nice shot that opens up a cut on Saparbek. Villante circles and then comes in with a nice body shot. Safarov with a nice leg kick. Villante comes forward and lands a big shot that drops Safarov. Saparbek gets back up and eats a huge uppercut for his efforts. He’s back on the floor and Gian comes in with punches from the top. Villante opts to let Safarov back up. Saparbek charges forward with punches. He lands a shot but then eats a right hand from Villante. Another crisp jab scores for Gian. Safarov throws a front kick and it connects low. We break so that Gian can recover from the groin shot. We restart and Villante lands a big shot. Safarov returns fire with a nice combination. He lands a big shot that drops Villante. Gian pops right back up but he eats another hard right hand. Saparbek presses him against the cage and works a knee. The fighters break off of the fence and Safarov lands another nice counter right hand. Gian with a leg kick. Saparbek with a right hand. Round one comes to an end.

Round two begins and the fight was almost stopped between rounds as Safarov has an injured knee. Gian opens up with a leg kick. Safarov returns fire with a beautiful combination. Gian with another leg kick. He is targeting the injured leg. Safarov with a left hook. Gian with another leg kick. Saparbek charges forward with a combination. He lands a nice left hook. Gian circles and lands a right jab. He follows that up with a nice combo. Gian with a hard leg kick. Safarov shoots in for a takedown but it is not there. Villante with an uppercut. Safarov desperately shoots in for a takedown. He gets a hold of a leg but cannot score the takedown. Safarov presses forward with hooks. He misses and Gian connects with a big counter shot. He presses Safarov against the fence and begins unloading punches. Villante switches to elbows and the referee has seen enough and steps in to stop the contest.