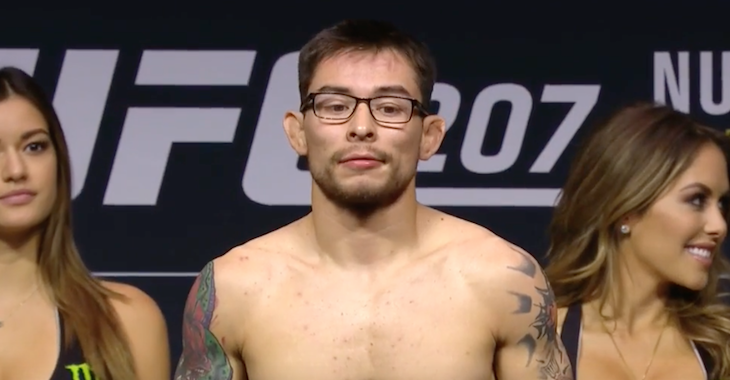 Round one begins and Smolka pumps his jab early. He follows that up with a side kick and then a right hand that misses. Borg presses forward and the fighters tie up in the clinch. The break and Ray misses with a left hand. Smolka attempts a high kick but Borg catches it and utilizes it to score a takedown. He lands in side control. Louis scrambles and gets back up but Borg quickly takes him back down. He moves in to full mount and begins working some shots. Louis rolls and gives up his back. Borg looks to secure a rear-naked choke but Smolka defends. Louis rolls and Ray winds up back in full mount. Louis scrambles but Ray takes is arm. He looks to lock in an omoplata but Louis is able to escape. Louis rolls for a leg lock but Ray catches him with a big shot and then another. Louis lets go of the leg and tries to get up he does but Ray puts him right back down. Good elbow from full guard by Borg. Round one comes to an end.

Round two begins and Borg misses with a head kick. Louis is circling and trying to stay on the outside. He misses with a combination. Borg replies with a leg kick. He comes over the top with a right hand. Smolka circles and lands a jab. Ray comes forward and catches Louis with an uppercut. He drops down and scores a takedown. After a brief scramble, Borg winds up in side control. He quickly moves to mount. Smolka somehow grabs a hold of a leg an attempts a submission. Borg scrambles and then drops a massive right hand on the Hawaiian. Borg is back in side control now. He works some shoulder strikes. Louis scrambles in an attempt to break free but Borg is having none of it. He maintains top position and searches for an arm triangle choke. He lets that go a works some body shots. Smolka scrambles and gets back to his feet. Borg dives in for another takedown but Louis grabs a hold of his neck and looks for a guillotine. Ray escapes the hold and winds up in top position. He lands a right hand. Louis searches for an armbar but cannot secure the submission. Round two comes to an end.

Round three begins and Smolka throws a combination. Ray ducks under and is able to score another takedown. He immediately moves to half guard. Louis attempts to scramble but cannot shake Borg off of him. Ray is now looking for an arm triangle attempts. He locks it in. Smolka is trying to fight it off but this submission hold is deep. Great heart being shown by Louis here. He survives and Borg moves back to mount. Louis scrambles but Borg is able to remain on top and now in side control. Another scramble from Louis and he gets to his feet. Ray still has him pressed on the cage though. Smolka tries to break free and does so. He connects with a jab and then throws a head kick which is blocked. A nice side kick and then an elbow from Louis. He gets Ray to the ground but round three comes to an end.