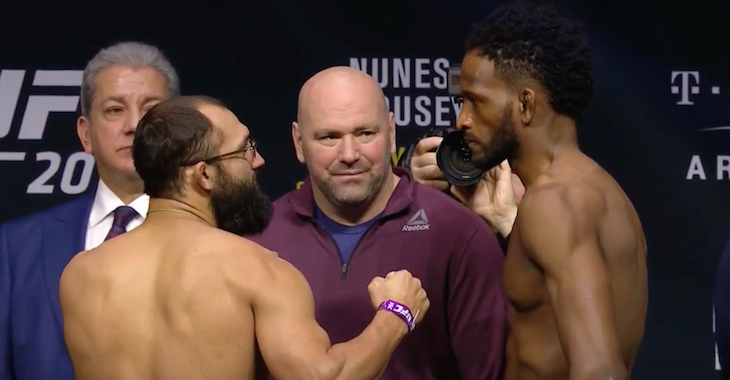 Round one begins and Magny misses with an early front kick. He follows that up with a side kick that is blocked by Johny. Hendricks charges forward and throws a big overhand left. It misses. He lands a follow up leg kick. Magny circles out and lands a push kick and then a jab. Hendricks charges forward and throws a big combination on Magny. Neil is backed up against the fence but he circles off and lands a pair of nice kicks to the body of Hendricks. Johny returns fire with a hard leg kick. Magny comes forward and lands a pair of jabs to the body. Johny charges forward and misses with a left but then shoots in and scores a takedown. He begins working from full guard. Two and a half minutes remain. Nice short shots from “Big Rigg”. Magny answers with some decent strikes from the bottom. He looks to secure a triangle choke but Johny breaks free. Hendricks with a nice left hand. He catches Johny in a triangle choke attempt. He switches to an arm bar but Johny is defending well. Magny with some strikes from the bottom. Round one comes to an end.

.@NeilMagny has Hendricks in a bad spot and starts dropping some serious elbows!! #UFC207 pic.twitter.com/9DugHPVArG

Round two begins and Magny lands a leg kick and then a jab to start. Hendricks with a right hand and then he scores an easy takedown. He moves to the back of Magny and begins working some shots. Neil rolls and Johny takes top position in half guard. Johny moves to side control and works some short right hands. He switches to elbows. Magny scrambles but gives up his neck. Hendricks looks to secure a guillotine choke. He gives up on that and Neil scrambles back up to his feet. That doesn’t last long as Hendricks quickly scores another takedown. Magny scoots towards the fence and attempts wall-walk. Hendricks lands some solid knees but Neil gets back up. Johny simply ducks down and scores yet another easy takedown. He begins working from full guard. Neil scrambles but eats a hard right hand while getting back to his feet. Johny still has him pressed against the cage and round two comes to an end.

Round three begins and Neil works some kicks to start. Johny charges forward but misses with a big overhand. Neil responds with a leg kick and then a front kick. Magny is circling to avoid the clinch. However, Johny quickly cuts him off and presses him against the cage. Johny is working for a takedown but Neil defends and breaks free. Johny misses with a wild uppercut. Magny returns fire with a leg kick and then a front kick to the body. He circles out. Johny presses forward and lands a pair of leg kicks. Magny returns fire with a high kick. Johny eats that and then lands a left. He quickly shoots in and lands a takedown. Magny quickly wall-walks and get back up but Johny stays on him in hopes of a double leg. Johny picks Magny up and slams him down to the canvas. Neil tries to score a sweep but Hendricks won’t allow it. Johny works some short shots from full guard. Magny locks in a triangle choke and starts landing some hard elbows. The horn sounds to end the fight. This was a close battle and now it is up to the judges.