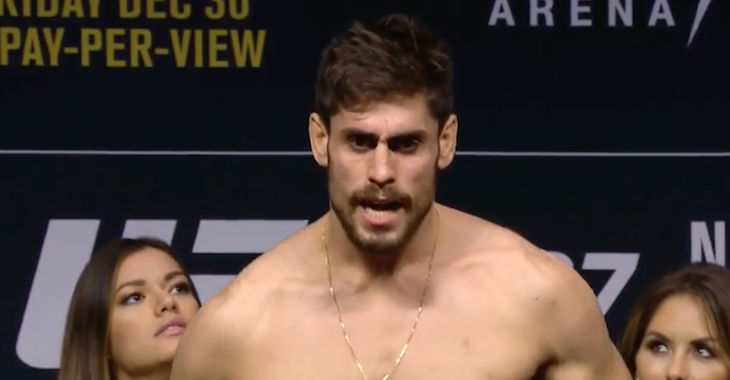 Round one begins and Vettori charges forward with a combination. Carlos Junior accidently catches him with an eye poke and the referee quickly steps in to let Marvin recover. We restart and Carlos Junior lands a right hand. Vettori comes forward and lands a nice kick to the body. He follows that strike up with a left jab and then another. Antonio replies with a jab to the body. Marvin circles away and then comes forward with another body kick. Again Carlos Junior catches him with an eye poke. After a short break we restart. Marvin charges forward with a combination. This time he catches Antonio with an accidental eye poke and so we break again. Carlos Junior says he is ok and we get back to action. Vettori lands a low kick. Antonio replies with a hard leg kick of his own and then another. He shoots in for a single leg but Vettori defends the shot. Antonio has Marvin presses up against the cage and is working hard for a takedown. Very good defense being shown here by Marvin. He lands a knee to the thigh of his opponent. He switches to some short shots. Antonio replies with a nice right hand from the clinch. Carlos Junior drops down and scores a nice takedown. Marvin is quick to scramble back to his feet. Antonio is looking for a guillotine choke but cannot secure the hold before round one comes to an end.

Round two begins and Vettori lands a pair of leg kicks to start things off. He is utilizing a lot of forward pressure to begin this round. Antonio shoots in and scores a nice takedown. It is short lived however as Marvin springs right back to his feet and takes the center of the octagon. A hard body kick scores for Antonio. He follows that up with a nasty leg kick. Vettori pushes forward and grabs a hold of Carlos Junior. He presses him against the cage and takes his back in the standing position. Marvin works some strikes from the back and then lets go of Antonio. Vettori presses forward and misses with an attempted flying knee. Antonio circles out and misses with a jab. Vettori presses forward with a combination and then scores a takedown up against the cage. Big shots from the top by Vettori. He switches to a guillotine. It looks tight but Antonio gives the thumbs up and says he is fine. Marvin lets go of the choke and switches back to some ground and pound. Nice shots from the top here by Vettori. Antonio lands an upkick but Marvin eats it and continues his assault. Vettori stands up and lands some kicks to the legs of his downed opponent to end round two.

Italy's @MarvinVettori gets the takedown, starts dropping BOMBS, then looks for the D'Arce!!! #UFC207 pic.twitter.com/XtnN0FB03C

Round three begins and Antonio presses forward and misses with a jab. Marvin replies with nice low kick. He misses with a follow up jab. Antonio circles out and then attempts a head kick that is blocked. Marvin returns fire with a kick to the body and then presses Antonio against the cage. Carlos Junior switches the position against the cage and works for a takedown. He gets it and begins working from half guard. Vettori is able to get his back against the cage and then utilizes the position to stand back up. Two minutes remain. The fighters exchange kicks to the body. Antonio shoots in and presses Marvin against the cage. He is working for a takedown. He lands a knee inside and then scores a trip takedown. Vettori is looking to stand back up but gives up his back. More knees from Antonio. He lands some short shots and then drops for a guillotine but the horn sounds to end round three.