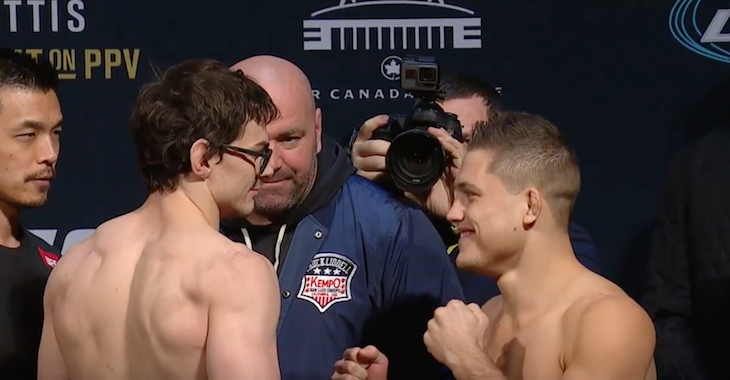 Round one begins and Dober misses a low kick to start. Aubin-Mercier misses with punches but finishes with a low kick that lands. Dober leaps in with a left but eats a counter hook that wobbles him. Dober is busted up from the shot but is still pressing the action. Aubin-Mercier lands a nice jab and then another. Dober circles out but Aubin-Mercier catches him with a counter left. Dober slips to the floor after an Olivier combo but jumps back up. The fighters trade low kicks. Dober’s nose is really bleeding now. The horn sounds to end round one.

.@DrewDober responds w/ a much needed knockdown to open up R2! #UFC206 https://t.co/iovt4Iu8ME

An emotional @OliAubin gets the job done via RNC in front of his Canadian faithful! #UFC206 pic.twitter.com/iOn817UIuP