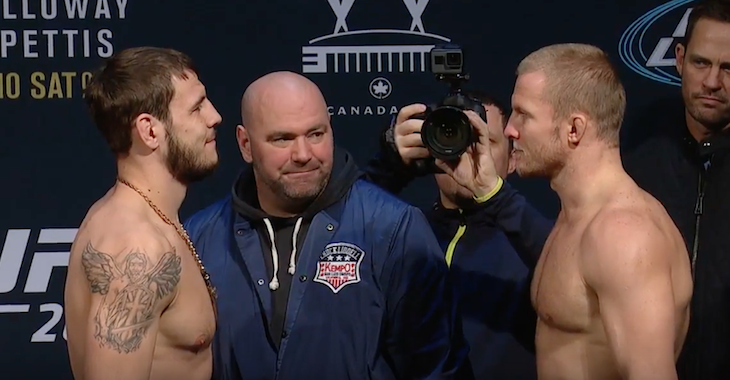 A light heavyweight scrap between Nikita Krylov and Misha Cirkunov served as the featured bout of tonight’s UFC 206 prelims in Toronto, Ontario, Canada.

Round one begins and Krylov connects with a body kick early. Cirkunov is applying pressure but Krylov is keeping him at bay with kicks. Nikita goes for a high kick but Cirkunov catches it and uses the limb to score a takedown. Krylov is looking for a guillotine choke. He uses the submission attempt to get back to his feet. After a brief clinch the fighters break and exchange body kicks. Cirkunov scores with a low kick. Nikita goes to the body with a kick but once again Misha catches it and uses the strike to score a takedown. Krylov scrambles back to his feet and scores a takedown of his own. The top position is short lived however as Misha sweeps Krylov to wind up on top. Nikita rolls and gets back to his feet. Misha with a big left that rocks Nikita. They battle against the cage. Another huge left from Cirkunov drops Krylov. Nikita shoots for a leg but Cirkunov locks in a guillotine choke. It is tight and this one is all over!

"ARE YOU NOT ENTERTAINED?!"