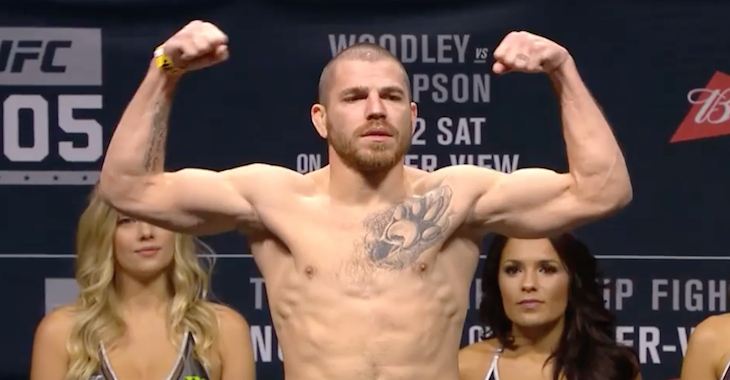 A catchweight scrap between Jim Miller (28-8) and Thiago Alves (21-11) served as the featured bout of tonight’s UFC Fight Pass prelims in New York.

Round one begins and Miller presses forward and lands a jab. He follows that up with a leg kick. Jim pressing the action here and lands a jab upstairs and then one to the mid section. Alves lands a nice counter. He misses with a wild right. Miller comes forward and lands a nice straight left. Alves fires back with a kick to the body. Both men land jabs. Miller lands a left. Thiago goes upstairs with a kick but it is caught. Miller uses that to score a takedown. He begins working from full guard. Jim tries to take the back of Alves but Thiago scrambles and gets back to his feet. Miller lands a nice right. Alves with a kick to the body. Miller fires back with a hard low kick. The fighters trade punches. Miller with rights and Thiago with lefts. Alves goes for a high kick but it is blocked. Round one comes to an end.

Round two begins and Thiago lands a kick to the body but Miller lands a nice counter left. The fighters trade low kicks. Alves misses with an attempted head kick. Miller misses with a combo and eats a kick to the body from Alves. Jim shoots in for a takedown but it is not there. They break and Jim lands a hard body kick. Thiago presses forward and Jim utilizes his forward momentum to take Alves down. Miller quickly moves to half guard. He lands a hard elbow. Miller is searching for a choke. He switches to punches and lands some hard shots. Alves gets back up to his feet however and lands a nice kick to the body. He pushes forward but Jim grabs a hold of his left leg and presses him up against the fence. They break and Miller lands an elbow and then a right. Alves with a left hand. Round two comes to an end.

Round three begins and Miller lands a front kick to the body. Alves lands a hard kick to the body of Miller. Jim fires back with a left hand. Miller is circling trying to avoid the power shots of Alves. He lands a hard leg kick. Alves presses forward with a big combo and then a hard kick. Miller sees an opening and dives in for a big takedown. Jim moves to half guard and begins working some short shots from the top. Alves is able to scramble and get back up to his feet. He instantly throws a high kick but misses. Miller with a nice left jab. He follows that up with a good kick to the body. Alves with two nice kicks but the second one is caught by Miller who uses the limb to score a takedown. Alves gives up his back during a scramble. Miller grabs a guillotine choke but is unable to finish the submission. He stays on top and moves to full mount. Alves quickly scrambles back to half guard. Jim attempts another guillotine. It is not there and Alves winds up on top. Thiago with some shots from the top but round three comes to an end.