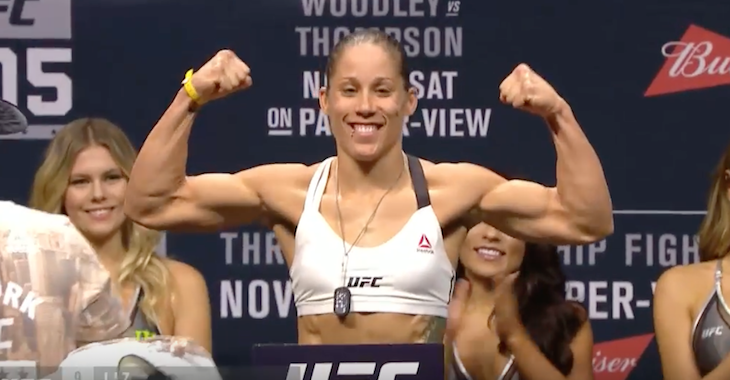 Round one begins and Liz comes out with a combination that misses. Chookagian is circling and pumping her jab. She lands a nice leg kick. She attempts another but misses. Liz lands a heavy leg kick. She comes forward and lands a push kick. Chookagian returns fire with back-to-back leg kicks. Carmouche fires backs with a leg kick of her own. Both fighters land jabs. Liz lands a nice kick to the body and then a jab. She lands a nice right hand. Liz presses forward and shoots in for a takedown. She gets it. Liz with some decent shots from the top. Katlyn is able to wall-walk and get back to her feet. Still, Carmouche is all over Katlyn. She lifts up Chookagian and slams her back down to the floor. Nice short elbows from the top by Carmouche. Round one comes to an end.

Round two begins and Katlyn opens up with a combo. She lands a kick to the body. Liz rushes in and grabs a hold of Katlyn. She presses Chookagian against the fence. Katlyn is able to break free and she quickly lands a combination. She follows that up with a nice leg kick. Liz gets inside and lands a big slam takedown. Carmouche begins looking for a guillotine but it is not there. Katlyn gets back to full guard. No real action here as the fighters jockey for position. Liz lands a short left. Chookagian scrambles and gets back to her feet but Liz is still all over her. Katlyn is able to break free and lands a jab. She follows that up with a kick. Liz returns fire with a hard leg kick. She fires off another but Katlyn lands a nice counter right. A good leg kick scores for Chookagian as round two comes to an end.

Round three begins and Liz lands a leg kick and then a right hand. Another nice low kick from Carmouche. Chookagian lands a nice combo and then a head kick. Liz drops. Chookagian is all over her but Liz gets the clinch. Big knees from Katlyn. Liz fires back with a knee to the body. Katlyn fires back with a nice right hand. Carmouche is in retreat mode. She shoots in for a takedown however and gets it. Chookagian with a nice elbow from the bottom. Katlyn gets back up but eats a nasty knee for her troubles. She lands a high kick and then a jab on Carmouche. Liz fires back with a low kick. Katlyn presses forward with a combination. Liz with another hard leg kick. Another nice combo from Chookagian finds the mark. Liz lands an inside leg kick that drops Katlyn. She pops right back up. Liz shoots in for a takedown. She presses Katlyn against the fence. Some short shots from Chookagian and round three comes to an end.