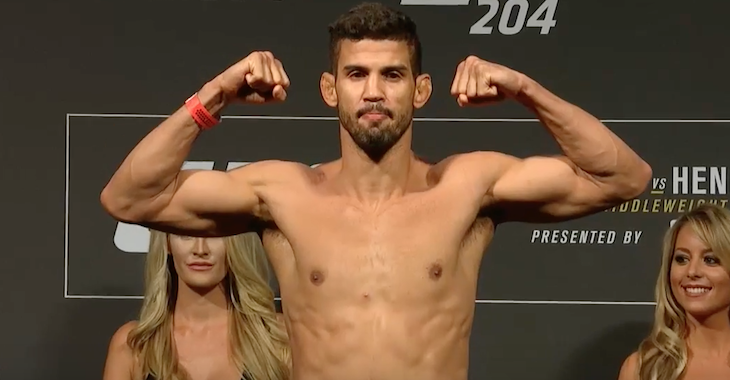 Round one begins and Santos lands a kick to the body to start. He follows that up with a front kick which is blocked. Martins circles and lands a low kick. Santos presses forward but misses with an attempt body kick. The fighters trade low kicks. Santos throws a high kick that is blocked. The fighters trade jabs. Martins is applying pressure now. Santos paws with a jab. Martins leaps forward with a left hook that misses. The fighters again trade low kicks. Another leg kick exchange. Martins catches a Santos low kick but cannot score with an attempted trip. Martins throws a big uppercut that partially connects. Santos fires back with a hard body kick. Round one comes to an end.

Round two begins and Santos throws a body kick that is caught by Martins. The fighters trade leg kicks. Both men are searching for an opening. Martins presses forward with a leg kick. He lands another and then another. Santos is struggling to find his range. He misses with a front kick upstairs. Martins lands a jab and circles away. Santos catches him with a hard leg kick. Both men score with low kicks. Santos misses with a jab and then eats a leg kick. He presses forward and lands a jab on Martins. Santos goes upstairs with a high kick but it is blocked. Martins returns fire with a jab to the body but eats a leg kick for his troubles. One minute remains and Santos lands a nice kick to the body. Martins presses forward with a jab but does not throw anything behind it. He misses with a low kick and Santos again goes upstairs with a high kick. Santos circles and lands a good kick to the body of Martins. Round two comes to an end.

Round three begins and Martins lands a leg kick to begin the round. Santos returns fire with a kick to the body. Martins takes the center of the octagon and lands a kick to the mid section. The fighters trade right hands. Santos throws a jab and circles out. Martins presses forward and lands a leg kick. Santos replies with one of his own. Martins is applying a lot of pressure here. Santos shoots in for a takedown but it is not there. Another leg kick scores for Martins. Santos once again returns fire instantly with a leg kick of his own. The fighters trade punches and Santos circles away. He lands a nice body kick on Martins. Two minutes remain. Martins lands back-to-back leg kicks. He presses forward and misses with an uppercut. He lands another leg kick. The fighters trade right hands. Santos circles away but eats a leg kick. A nice head kick lands for Santos. Martins scores with a big right that busts open Santos. Round three comes to an end.