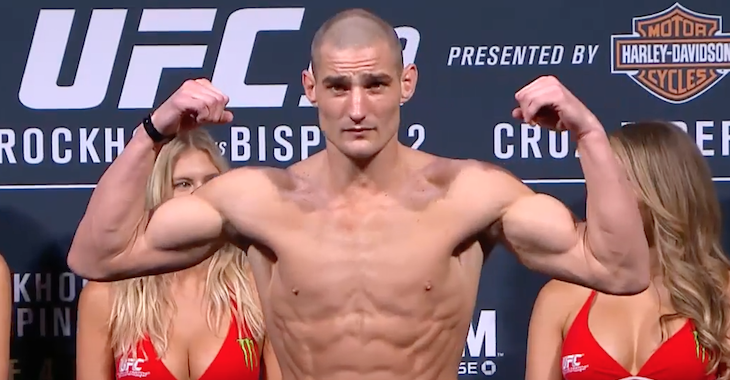 Round one begins and Breese opens things up with a kick to the body. Tom tries to go upstairs with a high kick but misses. Breese lands a leg kick. Sean is moving around well but has yet to throw anything significant. A solid leg kick lands for Breese. Tom lands a follow up kick to the body. Nice combination lands for Strickland. Breese with a nice left. Sean returns fire with a kick to the body. Sean is walking forward and applying the pressure. Breese misses with a front kick. Sean lands a nice right hand. Breese replies with a combination. A good leg kick lands from Sean who continues to walk forward on Breese. Strickland with a high kick. Breese charges forward with punches. Nice jab from Sean. He follows that up with a switch kick. Breese replies with a kick of his own but it is blocked. Sean lands a nice left hook. Breese with a nice kick and then another. Round one comes to an end.

Round two begins and Sean fires off with a kick to the body. Strickland lands a nice combination. He is walking Breese down. Tom lands a leg kick. Nice right hand counter from Breese scores. Tom responds with a jab and then a kick to the body. The fighters clinch and Sean lands a knee. The fighters break and Strickland lands a right hand. Breese throws a kick to body but it is blocked. He charges forward with punches but nothing lands. Sean lands a left jab but eats a left hook. Breese scores with a big kick to the body. The fighters trade punches. Sean pumps his jab. A nice counter left lands for Breese. And another. He is finding his range. Sean lands a good leg kick. Breese with a right hand. Strickland replies with a combo and then a leg kick. Sean lands a nice left hook. Breese back peddles. He gathers himself and comes forward with a nice combo. Sean replies with a jab and then a leg kick. Breese with a leaping front kick. Round two comes to an end.

Round three begins and these two welterweights have no intention of going to the ground. The immediately begin trading punches. A good combination from Strickland, who continues to walk forward. Breese replies with a good body kick. He follows up with a nice inside leg kick. Sean answers with a jab. Strickland attempts a takedown but it is not there. Good combinations land for both men. This is going to be a tough fight to call if it goes the distance. Nice kick from Sean but Breese answers with a big kick to the body. Sean lands a counter left hand. Breese shoots in and scores a takedown. Sean shoots back up to his feet. 40 seconds remain in the fight. Sean eats a jab on his way in. Breese circles but eats a right. Sean takes him to the floor and lands some big shots before the horn sounds.