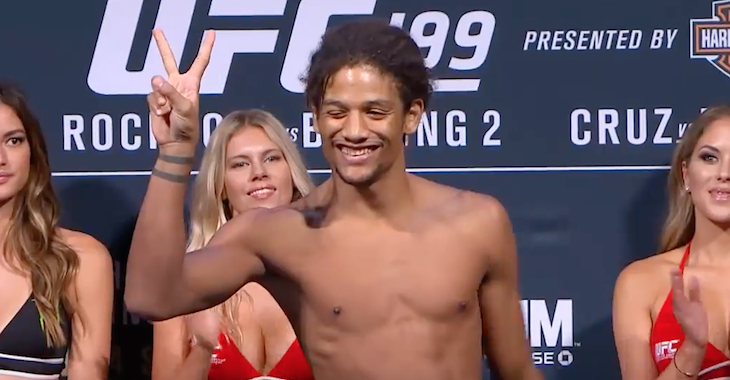 Round one begins and Caceres lands a leg kick. Caceres moves forward and lands a big left that rocks Miller. Cole pops back up to his feet and gets Caceres to the ground. After a scramble, Alex is able to take position and begins firing off shots from the top. Miller is able to create some separation and gets back to his feet. Caceres fires off with a jab. He lands a leg kick and presses forward on Cole. Nice high kick from Alex and then a straight left hand. Miller with a leg kick but Alex replies with a big kick to the body of Cole. Nice left hand and then a right from Caceres. Alex with a round house kick that partially lands. Miller comes forward and grabs a hold a Alex. Caceres picks him up and slams him to the ground. Caceres lands some shots from the top and then stands back up. Excellent body kick lands for Alex. He lands a nice combination. Miller charges forward with punches but ends up getting taken down. Alex decides to stand back up as round one comes to an end.

Round two begins and Alex picks up where he left off. He is landing nice kicks and punches. He lands a big left. Miller covers up. More shots from Caceres. He slams Cole to the floor and tells him to get back up. Miller is back to his feet and Alex presses him against the fence. Cole tries to pull guard but Alex is not having it. Cole gets up and comes forward with punches. Alex is able to avoid them and lands a leg kick. Caceres with some beautiful shots to the body. He tags Miller with a right hand. Nice combination from Alex. Miller covers up. Caceres with a kick to the body. Cole replies with a nice right hand. The fighters exchange inside leg kicks. Alex with another nice shot to the body. Round two comes to an end.

Round three begins and Miller paws with his jab to start. He throws a front kick. Alex blocks the kick and lands a right hand. He presses forward, picks Cole up off his feet and slams him to the floor. Caceres is working from half guard but decides to stand back up. Caceres with a nice kick and the a big punch. Cole with a left hand. He shoots in and takes Alex down. Miller moves immediately to mount. Caceres gives up his back. Miller locks in an armbar. It is tight! Caceres is squirming trying to get free. He does! Alex is back to his feet. Caceres pushes Cole against the fence. Miller tries to pull guard but Alex won’t let it happen. Miller is up and the fighters clinch. They break and Alex lands a nice right hand. Miller is able to land a sweep and get on top of Caceres. He takes Alex’s back and lands some shots. The horn sounds to end the fight.