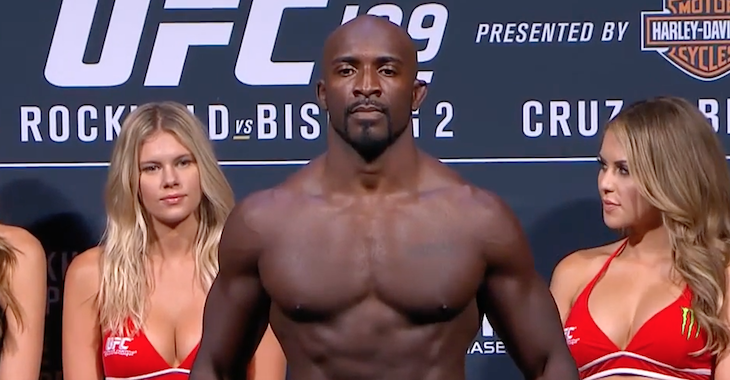 A middleweight bout between Kevin Casey (9-4-1 MMA) and Elvis Mutapcic (15-4-1 MMA) served as the second bout of tonight’s UFC 199 event in Los Angeles.

Round one begins and Casey lands a nice inside leg kick to start. Mutapcic misses with a high kick and Casey hits him with a side kick. Another nice leg kick scores for Kevin. Good combination from Mutapcic. Casey misses with a big overhand left. Beautiful leg kick from Elvis. He goes upstairs with a high kick but it is blocked. Both fighters miss with wild punches. Nice leg kick from Casey. He shoots in and gets a takedown. He immediately moves to half guard. Kevin with some good shots to the body of Elvis. Casey moves to side control. Thirty seconds remain in round one. Mutapcic scrambles and gets back to his feet. Flying knee attempted by Elvis. Casey with a nice jab. The fighters trade kicks to end round one.

Round two begins and Casey starts off with a front kick to the body. He lands a good inside leg kick. Elvis fires back with a kick of his own. Mutapcic with another low kick. Casey lands a nice uppercut. Elvis lands a good shot. Casey shoots in and lands a takedown. Elvis shoots back to his feet and lands a knee. Casey drags him back down to the floor and ends up in mount position. Big elbows from Casey. Kevin lands a left. Elvis tries to shake him but Casey’s base is too strong. Mutapcic eats another elbow and then scrambles and escapes out the back door. The fighters, now on their feet, engage in the clinch. Good knees to the body from Elvis. Mutapcic with some solid body shots and then some more good knees. Casey looks tired. Mutapcic ducks down for a single leg. It is not there so he fires more knees to the body. Round two comes to an end.

Round three begins and Mutapcic throws a high kick that misses to start. Nice knee and then an elbow from Elvis. Mutapcic with a good kick to the body. He is walking down Kevin. Casey lands a jab but eats a leg kick. Elvis pushes Casey against the fence. The fighters break. Nice right hand from Elvis. He follows up with some solid shots to the body. Casey accidently pokes Elvis in the eye and the fight is put on pause. The doctor checks Elvis’ eye and the fight continues. Excellent front kick lands for Mutapcic. Casey responds with a leg kick. Kevin looks tired. He is circling to avoid the strikes of Elvis. Mutapcic misses with a front kick. The fighters exchange leg kicks. A good inside leg kick lands for Elvis. He follows up with a body kick. Big shots and then a knee land for Elvis. Casey attempts a takedown. Elvis sweeps him and winds up in mount. Big elbows from Mutapcic. He lands a bunch of big shots on Casey before the horn sounds to end the fight.