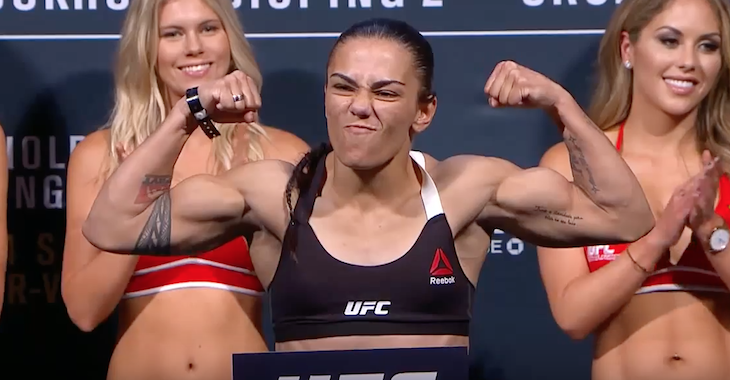 Round one begins and Penne begins by pawing her jab. Andrade is walking forward. She throws a viscous combo. Penne absorbs it but definitely did not like it. Penne gathers herself and throws a front kick. Once again Andrade presses forward and lands a big combination. Another good shot from Andrade. Penne lands a nice left jab. Andrade with a left hook and then some big shots to the body. She is overwhelming Penne against the fence. Penne is able to break free but Andrade continues to walk her down. Penne switches her stance. Andrade presses forward and lands some more big shots. Penne is circling but cannot get Andrade off of her. Andrade with a nice left hook and more shots to the body. Penne shoots in desperately for a takedown but it is not there. Andrade with a leg kick and then a left hook. Penne lands a nice combination. Andrade presses forward with shots. She lands a big blow to the body of Penne. Penne is backing up and Andrade lands another big shot. She falls to the ground at the same time the horn sounds to end round one.

Round two begins and Penne is throwing a lot more volume to start. She is pumping her jab in the face of her opponent. Andrade presses forward and lands a nice combination to the body of Penne. Another solid combo from the Brazilian. Penne tries to pull guard but Andrade is not having it. She tells Penne to stand back up and they continue on the feet. Big shots from Andrade. She is all over Penne and just walking her down. Another nice right hand from Andrade. She is going off with huge punches. More shots from Andrade. Penne is in all kinds of trouble. The referee has seen enough and this one is over.

Jessica Andrade TKO’s Jessica Penne at 2:56 of round two