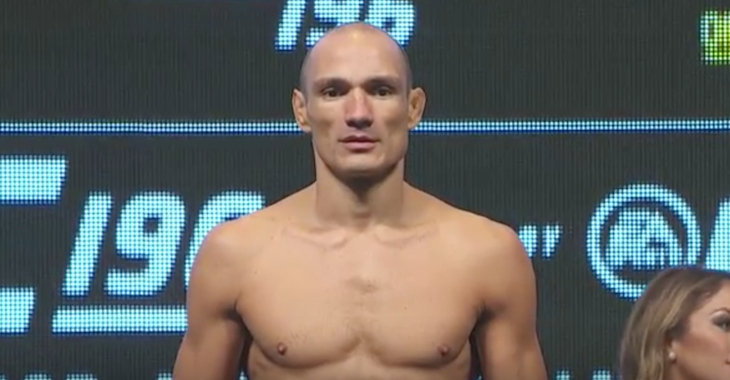 Round one begins and Miranda opens up with back-to-back head kicks. Guimaraes pushes forward and presses Vitor up against the fence. Marcelo is working hard for a takedown but Miranda is not having it. The fighters scramble and Guimaraes winds up in top position. Miranda gets back and they battle in the clinch. The referee steps in and forces the fighters to break. Miranda with a body kick. Good leg kick returned by Guimaraes and he follows that up with some solid shots. Marcelo is working for another takedown. Good elbows from Vitor while Marcelo tries to lock up his legs. The fighters break and then exchange leg kicks. Nice jab by Miranda. Guimaraes returns fire with a leg kick. Good combination before the end of round one by Miranda.

Round two begins and Guimaraes presses Miranda up against the fence. Huge elbows from the top from Vitor. These elbows are brutal. Guimaraes is hurt bad. he lets go of the takedown attempt but is on wobbly legs. Left hands from Miranda and then a head kick. The referee has seen enough this one is over.

Vitor Miranda defeats Marcelo Guimaraes via TKO at 1:09 of round 2