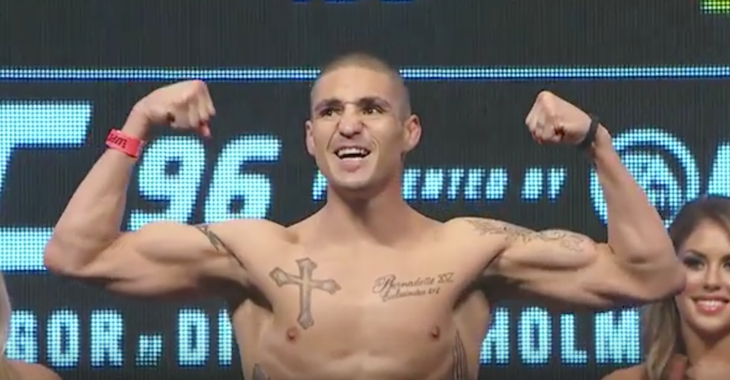 Round one begins and Sanchez charges forward and shoots in for a leg. Miller shakes Diego off and lands a step-in elbow. Miller misses with a left hand. Diego misses with a right. Miller lands a straight left and Sanchez replies with a body kick. Good combination from Miller. Diego responds with a kick to the body. Good counter right hook scores for Miller. Diego shoots in for a takedown and gets it. Jim is trying to setup a submission but Diego postures up and starts landing punches from the top. Nice hard shots to the body by Sanchez. Diego moves to half guard and lands some decent elbows to close out round one.

Round two begins and Diego opens up with a front kick to the body. Miller responds with a big inside leg kick that causes Diego to lose his footing. Another good inside leg kick scores for Miller. Sanchez with a quick jab but Miller counters with two good rights. Nice left hand over the top from Miller. Good body kick scores for Jim but Diego catches Miller’s leg and takes him down. Sanchez working from half guard. Miller is working hard against the fence and pops back up to his feet. Miller with a good head kick and then presses forward with punches. Diego partially lands a spinning back kick and follows that up with a good knee to the body. Sanchez shoots in for a takedown but is stuffed and Miller locks up a guillotine choke. Big knees from Miller who has Diego in a tough spot. He takes Diego down to end round two.

Round three begins and Sanchez runs forward with punches. Miller with another good step in elbow. Diego gets a hold of a leg but Miller shakes him off. Nice left hand from Sanchez and follows that up with a stiff right jab. Diego is definitely the aggressor here but Miller is countering well and scores with a left. Good body kick and then a jab by Diego. Nice shot to the body of Miller by Sanchez. Nice right hand from Miller finds a home. Good shots from both fighters. Two minutes remain in the third round. Sanchez fires a spinning back kick that misses. Jim looks tired, his mouth is wide open. Good right hand from Sanchez. Diego fakes a shot and Miller shoots in for a takedown. He gets it but Diego is immediately back to his feet. Sanchez gets a takedown but Miller springs back up. Big shots from both men to end the fight. This is going to be a tough one to score.