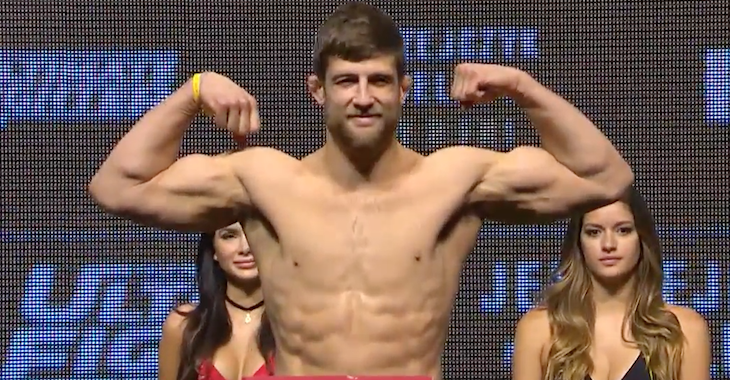 Round one begins and Sanchez misses with a body kick. Andrew shoots in for a takedown but Khalil is able to stuff the attempt. Sanchez lands a couple of leg kicks. Sanchez shoots in and lands a takedown. Rountree works his way to the cage and stands back up. Sanchez has his back against the fence. He drops down for a double leg and scores another takedown. Rountree is trying to use the fence to wall walk but Andrew is not having it. Sanchez is working from half guard and landing some short shots from the top. Nice right hands from Sanchez. Rountree stands back up. He misses with a big left and Andrew takes him back to the floor. Sanches is back working in half guard as round one comes to an end.

Round two begins and Sanchez lands a kick to the body. Andrews shoots in for a takedown but it is stuffed by Khalil. Rountree with a nice left hand. Sanchez shoots in for a single leg but Rountree is defending well. Sanchez eventually is able to drag Khalil down to the floor. He moves to half guard and begins landing some ground and pound. Rountree is in a bad spot here but Andrew is unable to land any significant shots. Under a minute to go now and Andrew is peppering Khalil with short shots. Rountree is bleeding as round two comes to an end.

Round three begins and Khalil will need a finish to win this fight. Andrew shoots in for a takedown but Rountree says no. Sanchez presses him against the cage and begins working for a trip. He lands the takedown and begins working from full guard. Nice short shots from Sanchez. He moves to half guard. Andrew takes the back of Rountree and sinks in one hook. More good short punches from Andrew. One minute remains in round three. Khalil has to scramble otherwise he will be stuck in this position until the bouts conclusion. Khalil cannot escape the position and Andrew lands short shots until the horn.