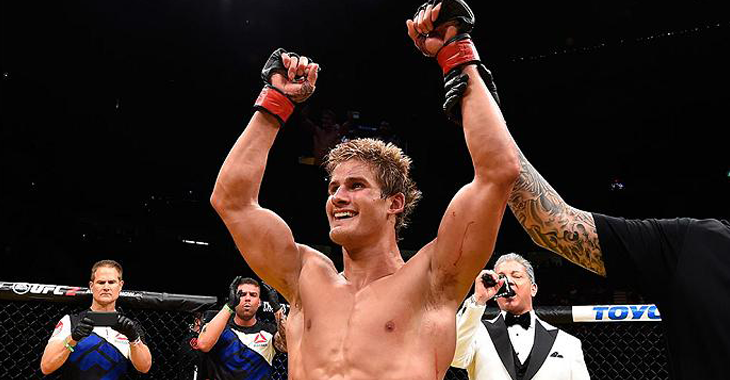 Round one begins and Michel starts off with a leg kick. Sage counters with a nice 1-2. Quinones attempts a superman punch but Sage greets him with another cross. Northcutt just misses with a spinning wheel kick attempt. Sage working his jab now. Michel attacks his lead leg and then connects with a right. Sage’s nose is now bloody. Northcutt circles and then lands a big shot the causes Michel to stumble back against the cage. Quinones comes forward wining shots. Sage once again counters nicely with a cross. Sage misses with another head kick attempt. He follows that up with a jumping knee but eats a side kick from Michel. Sage dives for a takedown as round one comes to an end.

Round two begins and Sage comes forward with a right cross followed by a leg kick. Sage counters a Michel strike with a combo upstairs. He steps in with a kick but eats a cross. They trade punches, Michel blocks a head kick. Neither fighter is landing much other than leg kicks. Sage steps in with a right hand. He lands another. Northcutt smacks a pair of kicks off Michel’s arms. Northcutt circles and then lands a hard kick to the body. Michel responds with a left hook. Sage eats it and then dives in for a takedown. He gets it and moves to side control. The horn sounds to end round two.

Round three begins and Sage starts off quickly. He lands a right hand. Both fighters connect with kicks to the body. Sage shoots in for a takedown but is unable to secure it. Northcutt with a triple jab. He appears to be very confident now. Northcutt with a hard body kick and then he sends Michel to the floor with a side kick. Michel gets right back up but eats an uppercut for his troubles. Michel lands a right hand in the pocket. Sage replies with a nice counter combination. Sage shoots in and slams Michel to the floor. Northcutt looks for a guillotine but then gives up on it. We are back on the feet and both fighters lands clean right hands. Northcutt attempts a cartwheel kick just before the horn sounds to end the fight.